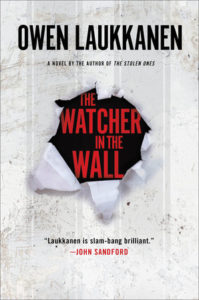 This is the first one of Laukkanen’s books I’ve read – the subject interested me – and now I know what to say when someone has read every Harlan Coben title. Give Owen Laukkanen a try. This is a thriller with a heart and a brain, a difficult combination to resist. Laukkanen’s series characters are Minneapolis FBI agents Kirk Stevens and Carla Windermere, and Stevens is caught off guard early on when one of his daughter’s classmates commits suicide.

Windemere has her own issues with a classmate’s suicide many years ago and she takes a personal interest in this young man’s death, which, upon examination, appears to have been encouraged by someone else. While the FBI agents are on a tech trail trying to figure out what happened and find the instigator, the parallel story shows the reader just what’s going on.

Laukkanen takes us back in time to when nerdy Randy Gruber has been taken by his mother to live in a doublewide owned by a violent, abusive man who regularly beats Randy up. His only solace is watching his new stepsister through a hole in his bedroom wall, and later, systematically destroying her life.

Gruber’s adult pattern of encouraging teens to kill themselves is laid down there, but the author’s concern is also with those who feel alienated, depressed – suicidal – and seem to have nowhere to turn to figure things out. He’s firmly on the heartbreaking side of the outsider.

As this tightly coiled plot unspools, with a do or die situation at the end that’s almost hard to read (even though I was pretty sure it would be OK), you won’t be able to stop reading or when finished, to stop thinking about the kids (and adults) in this novel. Laukkanen has an end note about his own struggle with depression, asking anyone who feels they need a hand to reach out. It gave the whole book more resonance as far as I was concerned. Aside from that this is a simply terrific thriller by a smart writer who creates characters you care about and remember.