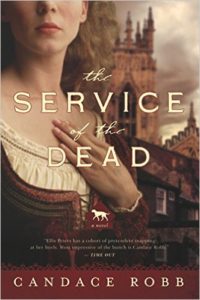 Candace Robb returns with a new series set in 1399 York, featuring a true badass, Kate Clifford. Kate has a rich backstory, fleshed out throughout the book while she veers from crisis to crisis. She’s a widow who moved to York from Scotland for safety’s sake, but as York at that time was a hotbed of political intrigue, nowhere is really safe. She’s lost her twin brother who “talks” to her (kind of like Hamish in Charles Todd’s Ian Rutledge books) and she’s looking after two wards, her dead husband’s bastards, now bereft of their mother. It’s an uneasy alliance.

She’s most at home with her dogs, Lille and Ghent, and when she has a chance, she starts her morning practicing her archery. Her clothes are made with handy pockets for knives and small axes; and she’s always on the alert. As this book proves, with good reason.

The story opens with the discovery of a body in the bawdy house she discretely rents out to some of York’s most illustrious citizens; not only is this horrifying, she’s expecting a lengthy visit from one Lady Margery the very next day. She manages to get the body cleared away and the house ready, but meanwhile her ward Philip vanishes.

There are several deaths which are surely connected though the connections aren’t clear until the end of the story; what Robb really excels at are action scenes, and there are several sprinkled throughout the narrative. They really make this a rocket powered read. With her sturdy servant Jennet at her side and the scarred baker Berend in her kitchen, she’s always protected, even though York is rough and tumble.

The story of Kate’s brother’s death, threaded through the story, are especially horrific; and Robb ends the novel with the return of one of Kate’s relatives, setting up for a next installment. Candace Robb was part of the wave of historical writers in the early 90s that included Sharan Newman and Margaret Frazer; clear descendants of Ellis Peters, all of them bringing a scholarly take to their writing while also supplying excellent stories and characters. It’s wonderful to have a new novel and character to cherish from this talented writer.