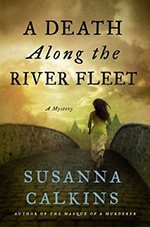 The opening of Susanna Calkins’ new book is a real knockout – her central character, Lucy Campion, stumbles across what she thinks is a ghost rising out of London’s stinky, scary River Fleet as she makes her way home. The year is 1667 and Lucy is relieved to find the apparition is a woman, not a ghost, but the woman is weak, confused, and covered in welts and cuts. She takes her to the the nearest doctor.

As Lucy and the doctor’s irritated maid take the woman’s clothes off and give her something clean to put on, they notice the clothing is high quality and that the woman’s hands are soft, making her a probable member of the upper classes. For this reason the doctor decides to take her in, and his wife decides to lend the woman some of her old clothes.

The doctor also asks if Lucy can leave her job for a week and nurse the woman, with pay. She works as a printer’s apprentice and bookseller and only gets her boss to agree to the time away when she says she’ll write up the incident as a text for a new broadside to sell. So Lucy is off to her odd duty, where the woman she’s tending to has no memory of who she is or where she came from, and she also has frequent “fits” – she has what was called the “Falling Sickness,” and what we know now to be epilepsy.

The doctor’s snobby and snarky assistant, however, seems to recognize the woman and on the strength of that her family is found and summoned to her bedside. As Lucy’s time with the woman wears on it becomes clear she has some memory and that she definitely knows what her station in life is.

Lucy herself is also dealing with a dilemma – she has two suitors: a highborn son of a Magistrate, and a constable. She is very attracted to the Magistrate’s son but is troubled by the disparity in their social class. Calkins doesn’t give her any easy answers. The world of 1667 London was in flux, and so is Lucy Campion, as she struggles to figure out the right path for her life. It’s as interesting as the mystery part of the book.

When the woman’s family arrives it’s clear there is plenty wrong with their family dynamics, and it turns out the woman’s brother is missing. The search for her brother consumes much of the rest of the book and another dead body just confuses everyone. Calkins is excellent at creating the feel and sensory experience of living in 1667, and she’s also excellent with the novelist’s skills of character and plot. This was a fast paced, excellent read and I enjoyed every minute I spent in Lucy’s company. This continues to be a wonderful and beautifully written new series.