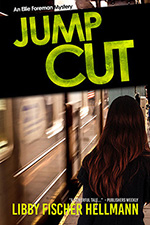 This book marks the welcome return of Hellman’s original series character, filmmaker Ellie Foreman. While it’s been a good long while since Ellie’s debut, there haven’t been enough books about her as the prolific Hellman has chosen to explore other characters and other times and places along with writing about her signature character. I was more than glad to rejoin Ellie in suburban Chicago, as she’s hard at work on a project for a company that makes all kinds of aircraft. They are trying to appeal to the wider public and Ellie’s videos, meant to be posted on social media, are supposed to be a kind of a friendly gateway for their customers.

Ellie is feeling very positively about the work she’s producing and excited to show it off when she’s asked to do so at a company board meeting; but she’s stunned when the VP, Charlotte Hollander, trashes the video and fires her on the spot. Her reaction is both anger and a burning curiosity to find out why. As a good detective, curiosity is one of Ellie’s salient characteristics, and she’s almost compelled to take the path she ends up taking.

She feels she’s being followed – or is she being paranoid? She’s smart enough to know something is up, and her protective, sweet boyfriend wants her to have nothing more to do with the company that fired her. However, when Ellie sets up a meeting with one of the guys who was hanging around while she was filming and arrives in time for her to see his accidental death under the wheels of a commuter train, she’s about ready to walk away when she finds a flash drive in a cigarette box that she’s sure belonged to he dead man. She takes it with her and begins to look into the flash drive on her own.

Her investigation leads her into a tangled web of espionage, counter spies and more deaths before the solution is found. As a main character, Ellie is so appealing I am almost willing to read about her as she goes about her daily life – the extra stuff is more or less a bonus. When Hellman ramps up the action at the end and makes it all very personal for Ellie, she’s at her very best as a writer; you’re completely on Ellie’s side and ready to find out what the heck is going on. This is the very welcome return of a beloved character.