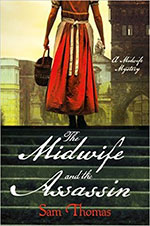 The excellent fourth installment in Sam Thomas’ Lady Bridget Hodgson series finds Lady Bridget bored at her country estate, where she’s fled with her deputy, Martha, and her adopted daughter, Elizabeth. The quiet is disrupted when she receives a message that her nephew Will (and Martha’s fiancée) is at the Tower of London and would they please come? They set out for London at once, eventually making their way to the Tower where they discover an unharmed Will but a demand from Cromwell’s head spy that they work undercover for him.

It’s 1649, deep into Cromwell’s upturning of the English throne and the imprisonment of the King. His head spy, or intelligencer, Mr. Marlowe, secures Lady Bridget’s compliance by telling her will seize her lands and imprison Will if she does not agree to go undercover and spy for him. So Lady Bridget becomes plain Mrs. Hodgson and she’s forced to live in a tenement in Cheapside, where she and Martha set up shop, all the better to keep an eye on the Levelers at the tavern up the road and the tavern’s owner, one Katherine Chidley.

The Levelers were a then radical group who demanded things like equal justice under the law for all and equal rights for women – literally hundreds of years ahead of their time. In 1649, they were alarmingly radical. Bridget quickly finds that she likes Katharine and feels terrible about spying on her, but she is quickly tested for loyalty by Mr. Marlowe. Luckily she passes with flying colors.

Sam Thomas is an actual historian and it shows in the detail he includes in his books, but he’s also a real honest to god novelist, excellent with cliffhangers, suspense and plot twists. I loved the setting and time period of this book, where the world was in complete upheaval with everything being questioned. The centerpiece of the book is the execution of King Charles; coming about half way through, it sets the tone for the rest of the novel which is fraught with surprising violence.

Unusually, Thomas, a male writer, has a central female character; but he’s masculine in the way he doesn’t hesitate to dispatch just about anyone. People perish surprisingly, and things happen with unexpected suddenness. He’s also great at the various birthing scenes Bridget and Martha are called to attend and they give a real energy to his novels.

In the course of the story Bridget finds a measure of personal happiness and finds that the hurly-burly of London suits her. She absolutely blooms where she’s planted. I love these books – I learn some history; I love the characters, and Thomas is an absolutely top notch storyteller. I’ve always thought that if a “regular” book is great armchair travel, an historical novel is even better – you’re also travelling to a different time period with different sights, smells and experiences. This is one of my favorite new series for all the reasons I’ve described, and this is an especially fine entry.