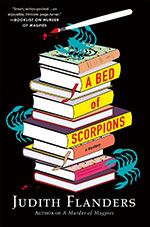 I loved Judith Flanders’ first Sam Clair novel, A Murder of Magpies, and I may have liked this one even more, as some of her plotting was clearer than it was in the first novel. In truth, though, that part didn’t matter so much to me. What I really love is the setting – Sam is a 40-something book editor in London – and in this novel she’s caught up by the apparent suicide of the business partner of one of her dear friends. The friend and his partner own(ed) a London art gallery specializing in a well known pop artist (Flanders creates an artist who would have been a contemporary of Lichtenstein and Warhol) and then she plunges the action full bore into the world of publishing and art and where the two sometimes collide.

Another death and a series of “accidents” make clear that something is afoot and that Sam, to the intense displeasure of her Scotland Yard boyfriend, is not only in danger but caught up in his case. And that’s not even the good part. The good part is the way Flanders brings Sam to full life and through a series of penetrating, sometimes snarky observations, she does the same for the publishing world. She’s insanely quotable.

This book also brings to life the obscure world of museum installers who also create the items sold in museum gift shops, the ones that go along with a big exhibit. (You probably have a Monet keychain or two in the bottom of your purse, so you know what I’m talking about). This book was a pure delight, start to finish, and the pacing in this one was much improved over the first novel. All in all a terrific, funny, light and intelligent read.