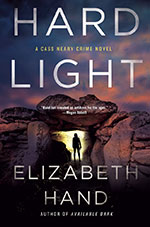 A stolen passport will only get you so far.

That memorable first sentence reintroduces us to one of my favorite protagonists, Elizabeth Hand’s Cass Neary. Hard Light, the third installment in the misadventures of our anti-heroine, follows closely on the heels of the excellent previous volume, Available Dark, as we find Cass in full flight from that book’s violent denouement in Iceland, the aforementioned passport in hand. It belongs to the junkie ex-girlfriend of Quinn O’Boyle, Cass’s elusive long lost love, briefly re-found and then just as quickly lost again. Quinn plans on slipping into the country separately, having giving Cass a piece of paper with a man’s name and the name of a pub as her only guide to their hoped for reunion.

The enigmatic note leads her on a crooked path to Adrian Carlisle, who is either protecting her or trying to kill her, and his companion Krishna Morgenthal, a troubled but talented Amy Winehouse-like singer, and their peculiar London demimonde. It’s a toxic nexus of drug dealers, anarchists and musicians that seems like a degraded echo of the Swinging London of the sixties when a similar mix of rock stars and criminals produced an equally perilous but much more glamorous brew.

I’m the ghost of punk, haunting the twenty-first century in disintegrating black-and-white; one of those living fossils you read about who usually show up, dead, in a place you’ve never heard of.

As a crime novel protagonist, Cass operates less as a cerebral calculating machine and more like a Waring Blender, who, through sheer force of personality, churns things up so that all the hidden heavy stuff comes to the surface, and as, usual, she’s finds herself in the middle of the crap, forced to deliver some mysterious packages to some mysterious people, and soon enough people on both sides of the transaction end up dead.

This, too is what it means to be a ghost: you forever witness your own slow self-destruction, and that of those around you. But no one knows what you’ve seen until it’s too late.

With all the blood in the water, Adrian fires up his vintage Land Rover and, amidst an apocalyptic blizzard, drives a suspicious Cass and a drugged Krishna to his boyhood home deep in the boggy wilds of the Cornwall. Kethelwite is the home of prehistoric relics and structure, but much more recently it was the site of a peculiarly sixties semi-commune of counterculture filmmakers, groupies and various hangers on, presided over and financed by  heiress Tamsin and her director husband, Leith Carlisle. The result of all this grooviness was ruined lives, possibly the most nauseating movie ever made, a catastrophic fire and some skeletons which are of more than archeological interest. Adrian becomes the voice of those who were children in the age of Aquarius, the “Blank Generation” who were gullible enough to actually believe the peace and love platitudes their elders were professing, and permanently disenchanted when it all collapsed into the Me Decade.

“How did it all get so f***** up?” he asked in a child’s voice. When we were little they told us there was magic. There weren’t any rules, because we were all going to make magic here.”

All I could do was shake my head and say, “You were misinformed.”

There are so many other passages in Hard Light I could quote because I just love the way Hand writes. Cass’s first person voice is memorable and pithy, and the novel is rich with meditation, observation and thematic obsession, not to mention a crackling pace and a well fashioned plot that, for all it’s bracing New Wave qualities, follows the path of the classic English mystery. Like Geoffrey Household’s suspense gem of 1939, Rogue Male, it starts in cosmopolitan London and ends in a hole in the countryside, and, like much of the golden age oeuvre, questions of parentage are paramount.

I once went to a panel at the Cleveland Bouchercon that was basically a group of authors whose characters were deemed “unsympathetic,” and I listened as they all proudly said they didn’t care a fig if they were unsympathetic or not, and, in fact, they hoped they were. This was all well and good, but only my innate civility (hem-hem) prevented me from pointing out that this panel was one of the most sparsely attended I’d seen, and located in the smallest and most out of the way room in the venue. I personally don’t care if characters are sympathetic or not, I only ask that they be interesting, but my interactions with customers over these oh so many years has taught me that readers are often looking for heroes and heroines that they would enjoy having a beer or a cup of tea with. I only hope that such predilections don’t prevent more people from sharing time with Cass Neary.

I hate resorting to the truth, but sometimes it’s the only way.

It’s true that Cass lies, cheats, steals, takes drugs and has a bad attitude and a foul mouth, but in the end, when push comes to shove she does the right thing and stands up for the weak and powerless, often with her steel-toed boot. Another tough female named Salander has had a lot of success in her own punk noir, and I can only hope that Ms. Neary enjoys similar success, because she and Elizabeth Hand deserve it for this original and captivating series. (Jamie)