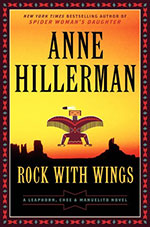 Anne Hillerman may be a unicorn—that very rare writer whose relative was a bestselling author, and who is able to continue that series and make it her own. In fact, I can’t think of another example. Tony Hillerman’s classic and beloved Leaphorn and Chee novels put me off of his daughter’s work but they shouldn’t have—this is a terrific novel and I can’t wait to read more. The younger Hillerman has made the series her own by having Leaphorn retire, and Chee married to the lovely Bernadette “Bernie” Manuelito, also a police officer. Shifting the storytelling focus (or at least 50% of it) to a woman’s perspective changes things up enough to make these books Anne Hillerman’s very own.

She has some of her father’s pacing and his love of the Navaho culture, his love the desert landscape (there’s an interesting bit where Bernie thinks about desert trees and how considerate they are to be so short and not block the view). Bernie is very appealing with her love of cake, her elderly Mama and a sister who is having some growing pains. The story kicks off with Bernie making a traffic stop. The man in the car feels off to her, though she can find nothing much in his car (except a loaded gun, illegal on Navaho Nation land) and a trunk full of boxes of dirt. But Bernie turns him over to the police station and prepares for some time off with Chee; they plan to take a working vacation with Chee’s cousin who is starting a photo tour business.

Their pleasure in their vacation is cut short when Bernie gets a call that her sister has disappeared and her mother is alone. She heads back, and Chee stays behind; he’s taking on a few days work in Shiprock on a movie set.

From there the two stories diverge, with Bernie focusing on the guy with the dirt in his trunk, the whereabouts of her sister, and the mystery of a burned car in the middle of nowhere. Chee gets involved in the mystery of a gravesite on Navaho land and eventually a dead body connected with the movie set. Leaphorn, who is recovering from a gunshot wound, is able to help both Bernie and Chee even though he can’t speak. He’s a small but powerful part of the story.

Both Hillermans are able to take a story with a large number of threads and create a smooth, coherent whole, making it all look easy. While Tony Hillerman’s prose was spare and lean, Anne’s is slightly less so, but her voice is a pleasant and endearing one, as is her hand with character. Even the smaller characters are memorable and relevant and I was interested in the relationship between Bernie, her mother and her sister. This is wonderful extension of a wonderful creation—I look forward to many more in the series.