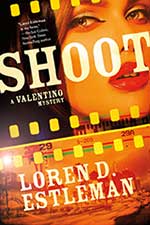 When you think about Loren D. Estleman, you probably associate him with the Amos Walker novels. He is, after all, the premier living exponent of the traditional P.I. novel in all its hardboiled glory. But more than that, he’s simply a very, very good writer, and like one of the progenitors of the genre, Dashiell Hammett, who wrote both The Maltese Falcon and The Thin Man, Loren is quite capable of distinct variations in tone.

It would be a little facile to say that Estleman’s Valentino series is his take on the “cozy” novel, but in the beginning of the fourth installment, Shoot, Valentino is looking at rug samples. Similarly, the alcohol and violence levels are low, the sunshine and frivolity are high, and the one night stands with endangered Femme Fatales are replaced by long term committed relationships and wedding planning. Valentino even has a smart phone. The detectives are alike in some ways, though, because as Walker is often a seeker after missing persons, film detective Valentino goes down the mean boulevards of Los Angeles in search of the movies of the past that are considered lost and gone forever. And I’m sure it will surprise no one that the sharks of Hollywood are just as rapacious and morally compromised as those of Detroit.

Each Valentino novel tends to revolve around a particular film genre, and in this case it’s the Western. He’s summoned by the aged white-hatted hero Red Montana to locate a stag film that his on-screen and real life love interest, Dixie Day, made before she joined him in the squeaky clean big time. He’s being blackmailed by whoever has it, and as a fee he offers Sixgun Sonata, the considered lost first pair-up of Red and Dixie. If Valentino can’t bring home the celluloid, not so straight shooter Red will torch the film.

The typically brilliant set-up propels the reader through the book, along with other elements such as Valentino’s ongoing attempts to refurbish the Oracle, the run down, money pit movie palace he’s trying to return to former glory, his search for enough surviving friends to populate the bachelor party for his aging boss and mentor, and generous satirical gems about life in La La Land. Although, like the typical Western, I prefer a little shoot out to sort things out in the end, Loren effectively wraps things up cozy style with no visible wounds, and a wicked demonstration that the action in the boardroom can get pretty cutthroat as well.

There’s thematic seriousness at play too, the operative lesson being that even though the humans that acted out the onscreen Western heroes may be fallible, and the history they inhabited more like fantasy, the moral code they personified may yet have some meaning in this crazy world.  (Jamie)