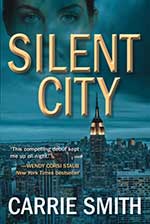 The two books I’ve read so far by new publisher Crooked Lane have knocked me out, and I am really smitten with Carrie Smith, who writes in one of my favorite subgenres: the police procedural with a female central character. NYPD Detective Claire Cordella is returning to work after a vicious and nearly deadly bout with cancer, and she’s out to prove she can handle the job no matter what. Of course she’s handed a doozy of a case her first day back: the murder of a popular public school principal, Hector Sanchez. He’s been found dead in his apartment, laid out like Christ on the cross. Even a cursory look reveals there are two sides to Sanchez, and Claire is determined to get to the bottom of it.

The book takes the reader on a tour of the New York City Public School system in general and Hector’s school, PS 177, in particular. Within that school the entire panorama of human behavior plays out. None of the characters are as you expect them to be, but they do behave like actual humans, including Claire, who is indeed a kick ass, take no prisoners type, but Smith shows readers the vulnerable side of her as well. It really makes you root for her.

The central players in the drama are the dead Hector, who had swooped into the school to save it and ended up being beloved by some parents, hated by some teachers, and viewed with a healthy skepticism by the higher ups in the school system. Smith’s explication of the way a public school system works is delicate, penetrating, and realistic. I felt of two minds about Hector as a reader, and what more ringing endorsement of character development can there be?

Smith also turns her hand to the living, of course, and within the police department Cordella is paired with a new Detective, Munoz, who hasn’t found his footing yet and who is relentlessly ridiculed by his fellow detectives. There’s also Heggerty, who seems like he’ll shape up to be an excellent love interest as the series progresses but in this first outing he and Claire are tense and prickly with one another.

There are also women characters of every stripe. There’s the highly placed district officer, Margery Barton, who is aggressive and driven career-wise. She takes no prisoners herself. There’s Marva, the assistant principal at PS 777, who is trapped by her own mild nature as she’s forced to step up when her boss, Sanchez, is killed. Smith also teases out the feelings, perceptions and reactions of the people who worked with Hector to give a full picture of his life. While this is a hard to put down and suspenseful read, it’s also an excellent look at human relationships and behavior. Claire Cordella is one of those characters that stick with you, one of those you want to get to know better. Thank heavens for series mysteries: as readers, we’ll get that opportunity. This is a bravura first book.