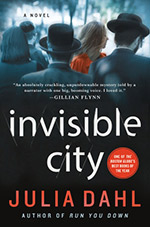 This is a true coming-of-age finding-yourself novel, a genre I sometimes find irritating, but I liked this one as it also illuminated a little examined culture. Dahl sets her first novel in Brooklyn, featuring fledging reporter Rebekah Roberts. Rebekah is a “stringer,” sent out wherever her paper thinks she can score a quote from someone involved in a breaking story. This finds her all over the city and as our story begins, it finds her in her own section of Brooklyn where a woman’s body had been found by a crane in a scrap metal yard.

The woman turns out to be a Hasidic Jew, and as Rebekah begins to dig into the story of the woman’s death, she’s also turning over bits of her own personal history. Her mother, who left her when she was a baby, was a Hasidic Jew who had ended up with Rebekah’s Christian father. Rebekah, of course, has always wondered about her.

As the dead woman’s body is extracted from the maw of the crane, Hasidim come and take away the body and the NYPD stands off from the machinations of the de facto Jewish police force (especially strong in Brooklyn), the Shomrim. This is all new to Rebekah, but she’s approached after talking to the dead woman’s sister in law by a cop who is also Jewish and who says he serves as a community liaison. The cop, Saul, gets Rebekah’s attention when he mentions that she looks like her mother.

Rebekah, who suffers from anxiety and just from being in her 20’s, basically, doesn’t always think clearly as she’s examining this case but she gets to a resolution, all the same. Saul’s mentioning of her resemblance to her mother makes her even more invested in discovering the dead woman’s killer.

As Dahl describes the way the Hasidic culture feels confining to some women – including both Rebekah’s mother and the dead woman, Rivka – Rebekah begins to find the places these women (and some men) go to to get away and to “question” or basically to find themselves. Dahl gives the other side of the coin equal shrift, explaining that to Jews, turning another Jew into the police, who killed so many of them, is considered a non starter. The Shomrim or “guards” or “watchers” of the community are often called before the police to settle all kinds of disputes.

Rebekah is learning her job; she’s learning who she is and a little bit about her mother; and, like Dahl herself, she’s learning to tell a story. As Rebekah had mostly called in details and quotes to a more senior writer who wrote up the actual story, Rebekah must now learn to do this for herself.

While I enjoyed this novel, I almost anticipate that the second one will be better, as the baggage has been unloaded. She’s laid the plot threads out for Rebekah and her mother to meet, and that seems like where this story was headed all along. One of the greatest things about series fiction is the way it can take a long look at a character’s life, giving he or she true depth. It’s something readers look forward to with each new installment of a series, and really talented writers will have you waiting for that next piece. Dahl may well fit into this category.