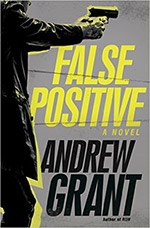 This book is a departure for Grant, whose first three books were James Bond style thrillers, and whose most recent, Run, was a straight up, no holds barred thriller. This one is a police novel set in Birmingham, Alabama. The central character is one Devereaux Cooper, a detective and damaged soul, scarred by a terrible childhood. Throughout the novel his backstory is teased out as he’s assigned the case of a missing child.

Grant gives the reader a look inside the head of the kidnapper as well, threading the kidnapper’s actions with the actions of the police. As the detectives begin to follow wrong paths thanks to false clues laid down by this person, it’s Deveraux who has the flashes of intuition that begin to lead them in the right direction. He’s assigned a new partner who seems a bit stand offish and it’s not clear if she doesn’t trust him or if it’s the department in general that doesn’t trust him. When he urges some actions that aren’t strictly legal (but that are expedient) you begin to worry about him, and that’s a good sign that Grant has really made you care about this character.

The plot is complicated but well-handled and the whole is a look at how childhood origins might shape your life: the central question is actually nature vs. nurture. As Devereaux uncovers a string of child disappearances and begins to figure out how they are related it’s hard to put this book down.

Grant always brings a little twist to the proceedings, however, and I’m not sure if there isn’t a nascent horror writer buried within his thriller writer persona. While this seems to be a straight up procedural, with a damaged outsider at the center, pretty classic stuff – Grant still manages to supply a twist or five that makes this novel just a little bit more than that. I loved the ending; it made the rest of the book even creepier, if that’s possible.

This is both a hard book to put down and a hard book to forget, and it’s nice to see Grant letting his freak flag fly proudly. It made the book truly his own.