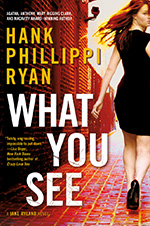 Four books in, Hank Phillippi Ryan has hit a sweet spot with her latest Jane Ryland mystery. A perfect mix of plot, suspense, emotion and character, Ryan takes a crazily snarled few days in the lives of Jane and her boyfriend Detective Jake Brogan and makes you live through them right alongside the characters. She layers her story so that she shifts between what’s happening to Jane and what’s happening to Jake, often cutting away just as she’s gotten to a reveal or plot twist, which only serves to sharpen the suspense.

This is a many faceted story. One thread concerns a stabbing in Boston’s Curley Park; the chaotic aftermath leads the police to an alley where they find one man on the ground and one man holding him there. They send the one of the ground to the hospital – is he the stabber? – and the other one, who may be a witness or maybe more than that, is also hauled to the police station for questioning.

Jane, in the course of a job interview at Channel 2 (yes folks, she might be headed back to TV after a visit to print journalism) is asked to step in as a freelancer on the park stabbing during her interview. She’s handed a video camera and she’s on her way, savoring the feeling of being back where she feels she belongs. Of course the park case belongs to Jake, which is complicated, and when Jane in approached by a young wanna be photographer who says he has the incident on tape, it becomes more so. When the young man’s camera is smashed by the man in the alley, the two plot threads become hopelessly intertwined.

Meanwhile Jane is anticipating the wedding of her sister Melissa and Melissa calls her frantically, saying her fiancé’s nine year old daughter, Gracie, has disappeared. Jane is now torn: help her sister? Try and get a job? It’s a conflict with her boyfriend’s job (cops and reporters are not supposed to date) but she needs to work. On the other hand – her sister. Throughout, Ryan balances the ethics of protocol and legality with the right thing to do, not always the same thing. All of her characters are struggling with this central concept.

Few writers are as skilled as Ryan at portraying the hectic pace of a work day, and in this outing, Jane is not only trying to balance her work life, her romantic life with Jake and her family responsibilities as her sister seems genuinely frightened, trying without total success to have none of them be the loser. Choices must be made and none of them are simple ones. Jane reluctantly leaves the park scene telling her possible new boss she has a family conflict and rushes to her sister’s side. Gracie’s mother is alternately hysterical and then reassured, as Gracie’s stepfather keeps calling in with updates. But the updates are bizarre and something seems off about the whole thing.

Jane is pulled back and forth between the two crises and with barely more than a chance to nod at Jake, and neither really knows what the other is up to. Meanwhile there’s another story thread involving a young woman, Tenley, who has a job monitoring the city via video (it’s her summer job) and she’s mindlessly bored by it until she notices something is actually happening on her video screen. Her ethical choice: to record what she sees, or not?

As Ryan layers Tenley’s family story into the rest of the plot she has a large number of balls in the air which she then proceeds to juggle with author-ly perfection. With each snap and turn of this crisp plot, not only are you often surprised, you’re emotionally engaged. This book had me in tears several times as Ryan explicates this complex story and the complex family relationships surrounding all of the incidents, not least the one involving Jane’s own family. I had a breathless feeling myself as I flipped pages, trying to keep up with Jane and Jake as they went about their business; Ryan breathes reality and suspenseful tension into the whole novel. It’s flawlessly done – one of the best and most resonant thrillers of the year.