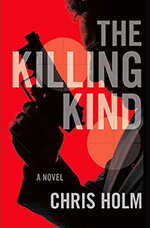 This is a tight, smart, no hold barred thriller – I’d compare it to the Bourne Identity movies (alas, I haven’t read the books) in that the action is so organic and well staged it’s about impossible to look away. Holm’s premise is also a great one: his main character, Michael Hendricks, is a hitman – who only hits other hitmen. It has some of the joyful precision of Prizzi’s Honor, which, fans of the movie will recall, was also about hitmen (or a hitman and woman).

Hendricks only kills people who are about to kill other people. The people he’s saving aren’t always the most worthy types, but they are innocents of a kind, and Hendricks is seeking atonement for various wartime events that are revealed in the novel. His only ties to society are a fellow army buddy, Lester, a genius hacker who has been left wheelchair bound by an IED in Kandahar; and his former girlfriend, Evie, who, thinking Hendricks is dead, has made a life with another man.

However, there would be no real story without a worthy opponent, and Holm supplies one in the form of Englemann, an equally gifted (though far more twisted) hitman. While it takes a couple chapters for all the story threads to knit together – there are several – once they do, there’s no looking back. This is a thriller that takes no prisoners, through action, rather than suspense. That’s hard to do in a book rather than a movie, and Colm effortlessly pulls it off. While Hendricks and Englemann are killing machines, Holm is apparently a storytelling machine. Don’t start this one too late in the day – you won’t get any sleep!