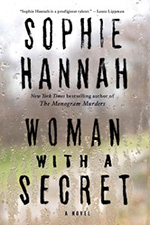 As with Tana French, I have a love/hate relationship with Sophie Hannah, an extremely talented writer who nevertheless (like Tana French) tends to dilly-dally a bit in the middle of her books. Hannah’s books are a series but the series characters are merely a very loose binder for the truly spectacular set-ups Hannah comes up with. She’s one of the best in the biz when it comes to setting up a story, and I imagine that’s why she was chosen to continue writing Christie’s Poirot books.

Her series characters, Charlie and Simon, are married detectives. Simon has the reputation of brilliance; he and Charlie are excellent at bouncing ideas off one another. Charlie’s sister is having a long-term affair with one of their co-workers; both are married to other people. That’s the background. The foreground in this particular novel concerns the murder of well-known columnist Damon Blundy, who was known for his unpopular opinions and Twitter flare-ups with famous folks he’s taken to task. It’s pretty clear he was incredibly obnoxious in life; in death, he’s discovered bound and suffocated in his home while his wife, two floors away, heard nothing.

We’re also introduced to Nicki, who clearly has some kind of secret though the exact nature and depth of her secret are Hannah’s concern through much of the novel. On the surface, Nicki is an average housewife with two young children living a blameless suburban existence. Who of us are who we seem to be on the surface, however? And that is indeed Hannah’s main theme in a twisty novel that finds Nicki’s life blown apart as the police take her in for questioning about Blundy’s murder.

Hannah is excellent at both character creation and at complex plotting. Her novels always take a good long while to unravel, usually containing a surprise ending, and this one is no different. Along the way, Hannah examines “normal” marriage and “normal” middle-class life and finds that none of it is actually normal. As Nicky’s story and Damon’s draw closer together, Hannah includes a glam former MP and a nutty writer of horror fiction, all grist to Simon’s mill as he uncovers rocks in search of the answer to who killed Damon Blundy. Postmortem, his unpleasant character emerges fully from the folds of Hannah’s storytelling.

Complex, thoughtful, even profound (I found her description of the interior of a woman’s purse especially memorable), she also takes a bit of a long time to get where she’s going. In this novel, I found the journey worthwhile, as the denouement and motives were believable and satisfying. Sometimes the motives attributed to her killer or the unveiling of the central villain (who often is the dead person) are either not believable or too sketchy. This novel did not have that problem and really, it’s a true pleasure to join the twisted mind of Sophie Hannah as she explicates a murder.