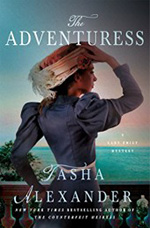 This is a terrific entry in Tasha Alexander’s fabulously entertaining Lady Emily series. In this outing, Lady Emily and her husband are in Cannes for the insanely extravagant celebration of their long time friend Jeremy’s engagement to an American heiress, Amity. As Alexander fills in the reader’s knowledge of Amity by going back in time to India where Amity and her friend Christobel met Jeremy’s brother Jack (and later Jeremy), it seems destiny that the beautiful Amity will become the future Duchess of Bainbridge.

Except. Everything about the engagement celebrations seem a bit off. Amity’s parents are rigid and judgemental as well as suspicious of Emily’s friendship with their daughter’s fiancée; Amity’s brother, Augustus, is definitely strange and it’s unclear if his peculiarity is dangerous or not. When a member of the engagement party commits suicide, it absolutely casts a pall over the proceedings.

So do a series of mishaps mainly affecting Emily and making her look bad to her hosts. While Amity desperately wants to be friends, Emily can’t quite warm up to her. And of course we’ve all known women who only get along with men; Amity seems to be one of these. As the party continues to venture on outings that continue to have an ill fated segment to them, the mood of the whole party becomes uncomfortable.

Alexander skillfully sets a suspenseful tone, playing with reader’s expectations and perceptions, as well as creating some truly stunning character portraits. As things accelerate to the denouement, it was hard to look away. I was gripped by Alexander’s portrait not only of Amity but of her relationship to Jeremy, to Emily, to Christobel and somewhat to Colin.

The apparent suicide was of course a murder and Alexander, while having a deft hand with characterization, is also an excellent mystery writer and this novel did not disappoint in any way. I of course loved the setting and as always, I love Alexander’s brisk storytelling. To me this is one of the strongest entries in a series that’s already one of the best historical mystery series going.