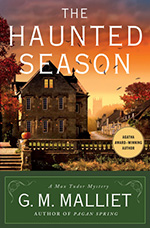 The fifth novel in G.M. Malliet’s charming and intelligent Max Tudor series is a delight. The book finds Max happily married to the lovely Awena, and they are the now doting parents of Owen. They seem to share child care almost effortlessly, with the exception of Max falling asleep in church during a sermon given by his new curate, Destiny. While Destiny is not in the novel for large chunks, she still plays a large part, as before heading to Nether Monkslip to report for duty, she overhears a seemingly incriminating conversation in the steam bath at her women’s club. Problem: every woman looks the same wrapped in a towel, and she has no idea who they are.

Malliet is an extremely skillful plotter and she holds Destiny’s information back until later in the novel, though it’s clear it has something to do with nefarious happenings in Nether Monkslip. The titled family inhabiting the manor house appears to be desperately unhappy – the head of the house has a new, young bride, and his two children fit only restlessly and unhappily into the family circle. The son, Peregrine, appears to be about to be “sent down” from Oxford (read: kicked out). The “Dowager” also lives in, and she’s a romance writer a la Barbara Cartland, down to the fluffy chiffon dresses and big hats.

Anyway when the lord of the manor is done away with, Max, as is often the case, is asked to step in as vicar (and former MI6 agent) and help the local constabulary with the ins and outs of the humans populating the mystery. Max, an excellent listener as well as being vicar, has ready access almost everywhere and being smart and perceptive is able to uncover a lot. As he unravels the layers of this dysfunctional family, he gets closer and closer to the truth.

Malliet’s storytelling style is nothing short of entertaining, and her prose is lovely. She also has a true gift with fictional names; in this novel the central family, the Baaden-Boomthistles, are a touch of genius. She’s very good at putting together a tricky plot and these novels are in every sense a riff on Agatha Christie’s village mystery format. It’s a great, timeless format and Malliet gently updates it by adding shades of psychological depth. This installment is one of the more charming in the series to date, as Malliet becomes more and more comfortable as a storyteller. These novels are a true pleasure, and if you enjoy a village mystery, don’t miss a single one.