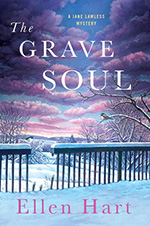 Ellen Hart is simply one of the very best traditional mystery writers in the business, and if you like a well crafted, thoughtful, traditional mystery and you don’t read Ellen Hart’s Jane Lawless series, you are really missing a bet. Jane, a Minneapolis restauranteur who also holds a P.I. license, is always the calm center of the storm. Except when she’s not.

One of Hart’s gifts is to slightly change things up with each book (and as this is her 23rd Jane Lawless outing, I imagine that’s not such an easy task) and in this one the opening sequence is nothing short of spectacular. We are introduced to a woman who has been beaten, finds brief sanctuary, and is thrust back into the snow. We’re given a Wisconsin setting, so we know it’s cold.

We don’t know who the woman is and if you hate, hate, hate spoilers look away, but it turns out to be Jane. From there Hart turns back the clock so we can discover just what it is Jane has been up to that’s led to a beating. It’s an incredibly effective opening, and if you’re like me, 23 books in, you’re pretty fond of Jane. You want to find out what happened to her.

From there Hart constructs a plot that finds a former employee of Jane’s asking for help with his girlfriend who has “disappeared” into the folds of her family in New Dresden, Wisconsin. He has met them but doesn’t know them well and is worried when his girlfriend won’t return his calls. He’s sure something is up.

So now there are two things the reader almost desperately wants to know: what happened to Jane, and what the heck is up with Kira Adler, the young man’s girlfriend. As Jane begins to explicate the Adler family she uncovers a number of secrets, one of them the mysterious death of Kira’s mother when Kira was only five. She’d begun having nightmares about her mother’s death and that leads her down the rabbit hole.

Now, there are two schools of thought on Jane’s loud, over the top best friend, Cordelia. Some people hate her so much they won’t read the books; I personally think she’s a hoot and love reading about her. She always provides some comic relief while at the same time being completely loyal to Jane in every way. Cordelia joins in early on and pops up throughout, so if you’re not a Cordelia fan, this book may annoy you.

As Jane puzzles out just what’s happened to Kira and what’s going on in her family, and the book comes full circle back to the opening sequence, you won’t be able to turn pages fast enough. Hart never writes too long, her pacing is great, and her characters are wonderful. Even smaller characters are memorable and serve their purpose. These novels are a master class on how to write a well constructed mystery. The Grave Soul is one of Hart’s best, and that’s saying a lot.