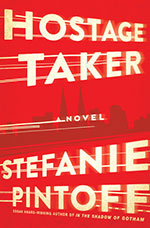 Unfortunately, Stefanie Pintoff is no longer writing her wonderful (and Edgar winning) series set in turn of the century New York; fortunately, she’s turned her hand to thrillers and she’s very, very good at it. I wasn’t so sure when I saw the title (which is kind of generic) but I don’t think Pintoff as a writer is actually capable of writing anything approaching generic. She’s too good, and too smart, of a writer. The book I was most reminded of as I was reading was Deaver’s The Bone Collector, both for the intelligent storytelling and for the memorable main character.

The main character, Special FBI Agent Eve Rossi, is recalled from compassionate leave to take over an enormously front and center hostage situation. There are few more iconic or beloved structures in the United States than St. Patrick’s Cathedral in Manhattan, and that’s where Pintoff has set her story. A “hostage taker” has sealed off the cathedral, wired it to explode, and as Eve arrives on the scene is demanding to speak to her, though her higher up decides to start off with an NYPD negotiator instead. This turns out to be a terrible mistake.

While the body count in this novel is far from minimal, Pintoff’s historical series was actually at times more gruesome than this tightly wound thriller. As Eve attempts to forge a connection with the hostage taker, she recalls her own “Vidocq” team, named for the French thief who turned himself in to the Surete in 1809 and in exchange for a clean record, offered to help catch thieves. Eve’s team are an amalgamation of thieves, high end computer hackers, former drug dealers and others who were on the wrong side of the law and have now turned their out of the box thinking skills to solving crimes.

Pintoff takes the time to establish each of the characters, so she’s invested you as a reader from the first with the setting, and then continues to do so through her skillful use of character development. Interspersed through the narrative are the thoughts of the hostage taker as well as background reports on each FBI agent, describing their strengths and weaknesses. Eve is also requested by the hostage taker to assemble some disparate witnesses and she sends her team out to find them, as not agreeing to the hostage taker’s requests seems to result in death.

There are some excellent threads involving a priest who disapproves of any sort of damage to St. Patrick’s, a missing teenager, and an Iraqi war vet suffering from PTSD forced to go back into a dark, confined space to attempt to breach the unbreachable. All in all, this is a very well thought out, suspenseful read that sticks with you. Pintoff has definitely set things up for a sequel, which I hope will be forthcoming.