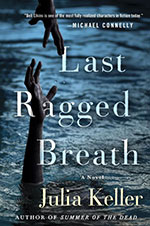 Julia Keller is using the slow, steady approach toward becoming one of the best crime writers in the business. Some people rocket to the top, some build their way up more gradually – it’s a real pleasure watching Keller’s ascent. In her fourth novel (to my mind, her strongest yet) she focuses on the murder of a developer in tiny Acker’s Gap, West Virginia. The dead man had been campaigning to buy up land for a shiny new resort in Acker’s Gap, where, like much of Appalachia, the scenery is gorgeous and free, but the life is hard and brutal with a tanking economy, thanks to the demise of mining.

Threaded into this story is the backstory of Royce Dillard, a recluse who lives with his seven dogs and rarely ventures into town. He’s quickly arrested for the crime – the body was found on his property – but his history makes prosecutor Bell Elkins dig just a little deeper. He’s a survivor of a terrible 1972 flood that swept away a good part of the town, killing hundreds. Little Royce was thrown to safety by his father and he’s been regularly interviewed on the anniversary of the disaster ever since. (The flood is a real one, the Buffalo Creek disaster. Ed.)

Sometimes Keller’s storytelling threads can become too diffuse and numerous – I thought that was a bit of an issue in her last novel, Summer of the Dead; but in this novel she’s tightened her storytelling skein and drawn her story threads more closely together, creating a good mystery along with her powerful narrative.

Bell, her protagonist, is a county prosecutor and she’s long ago left her fancy Georgetown law firm to return to her home in the mountains, becoming an integral part of the community. Just as integral was her friendship with the sheriff, Nick Fogelsong, but Nick has retired and taken a private security job. Bell misses Nick, she’s angry with him, and she’s not sure how the new sheriff, a young woman, is going to work out. Keller beautifully portrays the many layers of emotion Bell is experiencing.

Keller is also an absolute master as providing a three dimensional view of her characters, as well as a well reasoned and explicated look at all sides of whatever she’s chosen to write about. In this novel the less sexy back topic is corporate responsibility, but she makes it memorable and gripping all the same. She gives both sides to the views on mining; on development; and on the effect of both on Bell’s particular small town. There’s an amazing scene inside a mine shaft that illustrates every point she wants to make, as she shows, not tells, the reader her point of view.

The magical spark that lifts these novels above only polemic or only a great story or only a great setting (though all three of these things are true of her books) are her characters and the depth and heart she gives to them. I can say I have been as moved by Keller’s books as I have been by other favorite authors of mine – William Kent Krueger, Louise Penny, and Julia Spencer-Fleming. That’s high praise and it’s well earned not only by Keller’s entire body of work but by this particular novel, which is one of the reads of 2015.