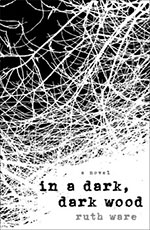 This is the first novel by Brit Ruth Ware, and it’s that rare thriller that is also a mystery. In a straight thriller, you may know whodunnit, and the thrill is catching or finding that person in time. But combining the best parts of the thriller—pacing, suspense—with the best parts of a mystery—whodunnit?—is a rarer skill. It’s shared by such writers as Jeffery Deaver and Lee Child. Heady stuff for a first timer.

This is a completely gripping story—I read it straight through in one sitting, just about—and you won’t forget it anytime soon. The central character is Nora, who lives alone in a London flat. She’s contacted out of the blue by someone named Flo who is throwing a bachelorette party (or in Brit lingo, a “Hen Do”) for Clare, Nora’s childhood best friend who she hasn’t seen in a decade.

As the book opens Nora is running through the woods, and then wakes up in the hospital with no memory of what has happened. Piecing it together is the book’s narrative arc, and as Nora starts to remember, the reader gets a clearer picture of what transpired at what sounds like the world’s most uncomfortable house party.

For starters the bride is marrying an old friend, James. There’s something between Nora and James, something the reader isn’t privy to until the end of the novel, but it seems clear Clare was afraid to tell Nora who she was marrying. As the disparate group gets to know each other—partly through the corny games Flo has put together and partly through a great deal of drinking—it becomes more and more obvious that something terrible is going to happen.

That feeling of dread is whipped up by the house itself, a modern and incongruous glass and steel concoction in the middle of the countryside, and by the dusting of snow that appears on the first night, making everything that much more uncomfortable and somehow more isolated. The author refers to Christie’s And Then There Were None but I was more strongly reminded of Agatha’s creepy psychological thriller, Endless Night, which focuses on an unwanted house in the middle of nowhere and also, true golden age style, has a very tiny suspect pool.

As Ware unspools her concise, tightly plotted story—with, yes, a tiny suspect pool—I was impressed by her feat of keeping the reader guessing until almost the very last page. While Ware fits into a newfangled tradition of British psychological thrillers, she’s avoided the trap of writing too long, and she also appears to embrace a classic mystery structure. It looks to all appearances like this new talent is going to settle in for a long career.