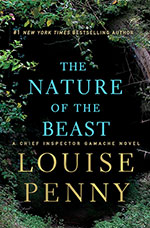 Louise Penny’s gift is to take bits of reality and weave it into her setting and characters and make the reader really feel what she is feeling. In this novel, her eleventh in her remarkable Inspector Gamache series, the action starts, as it always does, in tiny Three Pines. The villagers are frequently disturbed or annoyed or even amused by the tall tales of young Laurent Lepage, who is always emerging from the woods with a fantastical story.

When Laurent claims he’s seen a giant gun in the woods and that it has a monster inscribed on it, no one believes him but when he goes missing and he’s later found dead of an apparent accident things turn more serious. On a hunch, Gamache calls his son in law Jean Guy, who is still with the Surete and tells him he thinks little Laurent’s death was no accident. This is a mystery novel—of course it wasn’t.

The eventual discovery of the real thing—the real giant gun that Laurent had seen in the woods—literally blows everyone’s mind and no one is quite sure what to do about it. It’s a metaphor for the entire novel: when presented with life’s largest problems, how is one to respond?

Penny seems to be saying the response might be confused or meandering but it’s above all imperfectly human. There is a solution; it may be messy. She refers again and again to Yeats’ poem, “The Second Coming”, especially:

And what rough beast, its hour come round at last,
Slouches towards Bethlehem to be born?

For Laurent’s parents, the rough beast is grief; for the Surete it’s finding his killer; and on a wider, even global scale, it’s discovering why there was a giant gun in the woods in the first place and above all what should be done about it. The gun is the bit that’s reality-based, surprisingly; the emotional truths, as always, are all Penny’s own.

It’s remarkable, eleven novels in to her beloved series, that Penny can still find a fresh slant for her books. She’s examining life from every angle, and letting the reader in on her examination. While some things are certainly disturbing, her essential optimism is always present, and it keeps her readers wanting more.