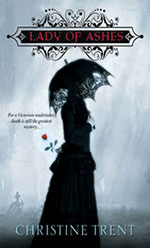 Lady of Ashes is the first in a historical mystery series featuring Violet Morgan, an undertaker in Victorian London. I found myself drawn into Violet’s world from the first pages, and the story held my interest to the end, despite the fact that this isn’t a straightforward mystery.

We know early on there has been a murder as the prologue contains a brief diary confession. But the book immediately shifts to Violet’s home and work lives. Excerpts from the diary appear throughout the book, reminding us about the murderer, long before Violet—or anyone else—has a suspicion that a murder has occurred.

Violet and her husband Graham run Morgan Undertaking. Violet’s marriage was initially “glorious,” but has deteriorated over seven years. Graham has become morose and nearly overwhelmed with hatred for the United States. Graham’s obsession leads him into an illegal, mysterious business with his seafaring brother, a business he attempts to hide from Violet. But this is only one of Violet’s issues with Graham.

Graham has turned into a social climber, and when he’s not ignoring Violet and their business, he’s criticizing her lack of household management skills. This definitely isn’t a light book, but I found the short excerpts from Mrs. Beeton’s Book of Household Management rather amusing. A recent gift from Graham to Violet, the book emphasizes important household details for the Victorian wife.

Violet has no interest in anything related to the house, and spends more and more of her time with the undertaking business. Her work introduces her to a variety of interesting characters including a mute young girl she takes home over Graham’s protests.

The book is impeccably researched and dense with details about the characters, their lives, and the news of the times. From descriptions of Violet’s clothes, to the appearance of buildings, to the odd smells coming from her basement, Ms. Trent brings Violet’s world to life. While I can be rather squeamish, I found the details about the Victorian undertaking business fascinating.

The author successfully weaves Violet’s story with real historical events and figures. Graham’s illegal involvement with the U.S. Civil War leads to portions of the book being told from the point of view of Charles Francis Adams, recently appointed as Minister Plenipotentiary to the Court of St. James by President Lincoln. Violet’s accidental meeting with Prince Albert leads her into the sphere of Queen Victoria.

A lot happens to Violet over the course of the book, but it makes sense as the book takes place over an extended period of time, from May of 1861 to September of 1865.

If you prefer mysteries that focus solely on the solution to a murder or murders, this may not be for you. But if you like a mystery rich in historical details, and with a lead character with a complex life, then I can highly recommend this book. How much did I like this? When I was about one-third of the way through I sent an email to Robin Agnew and asked if she had the second in the series at Aunt Agatha’s. I’m reading it now, and look forward to picking up the third book once I finish. (Guest reviewer Linda Kimmel, customer, book club member, and friend)