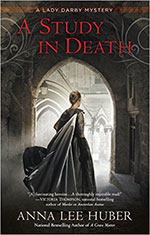 Anna Lee Huber’s fourth novel featuring Lady Darby, a well known portrait painter and widowed wife of an anatomist, finds our Kiera awaiting the outcome of her sister’s pregnancy, engaged, and of course stumbling over a dead body in the third chapter. Huber, as a writer, really knows how to keep things humming, and I enjoyed this book thoroughly from start to finish. Huber is deft with a good mix of romance, mystery and history, and through her two major characters, Kiera and her fiancé Sebastian Gage, she supplies a good back and forth dynamic to her storytelling.

Gage is a professional investigator who often includes Anna in his work; this time she asks him to take on the mysterious death of one Lady Drummond, who died before her eyes, in front of a husband who Kiera suspected of being abusive. There’s a thread through the novel of abused wives recognizing each other: there’s Kiera herself; there’s Lady Drummond; there’s Lady Statford, from Kiera’s first case; and there’s Lady Drummond’s best friend, Lady Russell. The women help each other and understand each other in ways no one else can; and for Kiera, who was fond of Lady Drummond (she’d been painting her portrait), the case is near and dear to her heart. Unfortunately it’s very difficult to prove that Lady Drummond’s death was a murder and not merely a terrible act of god.

As Kiera works through the disapproval of her future father in law; bears with her sister Alana’s plans for a gargantuan wedding, all to take her mind off her potentially life threatening pregnancy; and works through trust issues with her fiancé, she has much to deal with. Huber’s essential personal decency shines through in her storytelling and I feel a comfort level with her characters that’s a trick for any writer to establish. I also look forward to whatever is next for them. In short, Ms. Huber has me hooked.

The 1830’s Edinburgh setting is used as a backdrop to the storytelling, but certain bits of it are essential: the dangerous and desperate criminal underclass, for one thing, and the atmospheric setting in general makes the story being told far more memorable. A third and (unwelcome, to Sebastian) part of Kiera’s investigations is well known criminal Bonnie Brock, who, while protecting Kiera in his own way also brings her to the most unsavory parts of the city for answers. He’s essential as well, as he dilutes some of the plain niceness between Kiera and Sebastian, giving the story a bit of a kick.

Huber’s storytelling style and way of telling it reminds me a bit of Anne Perry, though she’s without Perry’s ponderousness. She’s more direct in her style and much, much more concise. This book had a more than satisfying wrap up and it also felt like Huber, as a writer, is settling in for the long haul. For readers everywhere, that’s nothing but good news.