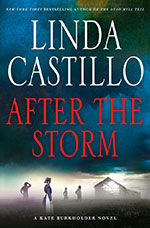 Apparently, mystery writers don’t think like other people. They can see things in the mundane that create horror. As I was reading Linda Castillo’s new book, I was reminded of a store visit from Thomas Cook years ago. He was recounting the experience of watching “Little Women” with his daughter. He said when it came to the scene where one of the girls goes through the woods to deliver some cookies, he thought to himself, “Oh, this is the rape scene!” Then he remembered he was watching “Little Women.” The cookies get delivered. Cook was disappointed by the lack of drama.

Linda Castillo, like Thomas Cook, is able to find drama in the ordinary – in the case of this novel, that most Midwestern of disasters, a tornado – but also pigs, dandelion greens and a baby deliver a wallop. While on one hand she describes the beauty of the Ohio countryside – and I can attest that the rolling Ohio hills where her stories are set are gorgeous – she can also plunge her characters into extreme danger at the drop of a hat.

As I was reading along I thought the sometimes brutal Castillo had forgotten to include an initial crime, but then I remembered, oh, someone was eaten by pigs in the first scene. Somehow Castillo finds the balance that makes the extreme violence she describes in the bucolic countryside believable. I think it may be because her central character, Kate Burkholder, is so grounded.

Kate is a former Amish who now serves as the police chief in tiny Painter’s Mill, where she grew up. Many of the Amish she encounters are familiar to her, and she easily slips into Pennsylvania Dutch when talking to them. This book centers on a childhood love and the discovery of some old bones by some boy scouts who are helping to clean up after the tornado.

While Kate is warily respected, she takes no prisoners when she’s on a case and this one gets to her as she works to identify the bones of someone who has now been missing for thirty years. While the identity of the person belonging to the bones isn’t a surprise, as is the story surrounding him and the complex layers of family loyalty and affection that surround his disappearance take until the end of the novel to be solved.

Typically for a Linda Castillo book I was flipping pages faster and faster as I neared the end.

The other thing that saves her books from sheer, bleak brutality is that the world is righted at the end of each novel. Kate ends up happy and grounded and you’re left hoping that it will continue to hold when she encounters her next case.

This has long been a vivid and original series with an unusual setting and it’s been a fun ride to see how Castillo has handled Kate’s long journey to adulthood and command not just of her police force but of herself. This is another well done effort from the talented Castillo.