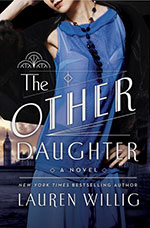 This isn’t really a mystery but it has a secret at its core, and any reader who enjoys writers like Tasha Alexander and Anna Lee Huber, who include romance in their novels, will enjoy this one. Willig writes what I would call romantic adventure stories – stories, no matter what the category, that are impossible to put down or forget.

Unlike, I think, any of Willig’s other books, this book is set entirely in the past, without an accompanying present day story line. She’s chosen the 1920’s, and she’s created a character who absolutely lives and breathes; you’ll be rooting for her, you’ll be heartbroken for her; you’re with her every step of the way. I think I’ve just described Willig’s two most salient attributes as a writer: she tells a great story, and she creates unforgettable characters.

Rachel Woodley, the “Other Daughter” of the title (or is she?), has grown up poor and as the book opens, she’s working as a governess for a wealthy family in France. She’s very attached to her charges but when she gets a letter that her mother is ill and she’d better come quick, she can’t get out the door fast enough, especially when she discovers that the letter has been delayed in getting to her by other members of the household staff.

It’s not really a surprise that despite her best efforts, at the end of her long journey, her mother is no longer living. What Rachel does for the rest of the novel is pretty much governed by grief, as she discovers a photograph of her father among her mother’s things. She’d long thought her father was dead as well, but in the recent newspaper clipping, he’s alive, titled, and escorting a daughter to a debutante party. She’s lost her mother, and she’s discovered her life as she’s known it is based on a lie.

As she moves forward after talking to the family lawyer, she meets a young man who offers her the revenge she’s now looking for. He offers to create an identity for her, lend an apartment filled with clothes, and take her to parties. In return, she’ll be fodder for the gossip column he writes. Rachel’s one goal is to get invited to her father’s country estate and confront him in person.

As she discovers, there are rules to interacting with the very wealthy, and Willig paints an excellent picture of the giddiness of the parties and the Bright Young Things who attend them but also of the emptiness Rachel eventually feels after night after night of dressing up, dining, drinking and dancing with the same people.

Rachel’s revenge quest is complicated when she encounters her half sister, Olivia, who on the surface couldn’t seem more perfect. While Willig isn’t a mystery writer, she’s adept at creating and solving mysteries of character: why do people behave in the sometimes peculiar ways that they do? What deeper motives do they have? That’s usually the mysterious secret at the heart of her novels, and this one is no different.

The peeling back of the layers of Rachel’s character, of her encounters with her sister, and of her revenge quest is the heart of this novel and I couldn’t stop reading it once I started. There’s really nothing that can beat a good story, well told. This is another gem from Lauren Willig.