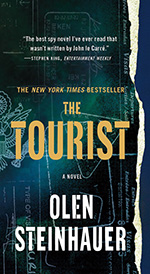 The world of the spy novel can be a fascinating one. In the mystery universe murder is always lurking below the surface of our quotidian world, but it’s an anomaly, a rent in the social fabric that must be repaired. To a spy, murder is protocol, simply business as usual. Spies are soldiers fighting a patriotic war, but the battlefield is everyday life and no one wears a uniform. Only a tiny fraction of the people an agent encounters are actually hostile, but it’s the most unlikely ones that are the most deadly, especially if you’re under the impression that they are your friends.

Olen Steinhauer has established himself as a twenty-first century master of espionage. John Le Carre and Graham Greene are the gold standards with their works that emphasize humanity and ambiguity in a field that only too easily gives way to a terrestrial supermen fighting cartoon evil (yes, I’m talking about you, James Bond), but Steinhauer is a worthy heir, writing complex tales for a complex age. For one thing, the battle is no longer between two monolithic heavyweights slugging it out in the shadow of the H-bomb, but a fractured menu of all kinds of groups, agendas and tactics. And, as Steinhauer demonstrates in my favorite of his books, the first Milo Weaver installment The Tourist, the true danger could very well come from agencies that are nominally on your side.

As the book begins, Milo, after a botched mission, has transitioned from a field agent, known as a Tourist, to a desk-bound analyst searching for an assassin known as “The Tiger.” (It’s a measure of Steinhauer’s keen self-awareness and wry sense of humor that every time a character refers to the Tiger they say something about how corny a name it is.) Milo had reached the end of his rope, his sanity fraying, in the adrenalin-soaked world of the field, and has painstakingly attempted to rebuild something resembling a normal life with a wife and step-daughter. When the Tiger is finally trapped, it’s Milo who finds himself in the most danger, and he must throw all that away in order to ensure his own survival, even fleeing the most comfortable fantasy of all, Disney World, to find himself on the run, a Tourist again. 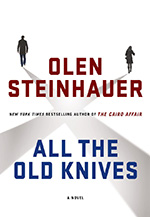 The Tourist has everything expected in a spy book: colorful foreign locations, a fast pace, violence and shoot-outs, but it is the lack of all those things that makes Steinhauer’s latest book All the Old Knives so interesting. It’s much more of a set piece, the narrative revolving around a single encounter between Henry Pelham, a C.I.A. Operative, and Celia Harrison Favreau, a former agent and also Henry’s former lover. Their conversation in a California restaurant seems friendly enough, but below their banter lies the specter of a colossal failure from their time together, the death of one hundred and twenty hostages in an plane on the tarmac of a Viennese airport.

Although the narrative moves back and forth in time and perspective, the action is remarkably static for the usually breakneck spy genre, a sort of “My Dinner With Andre” with death for dessert. Another movie that comes to mind is Coppola’s “The Conversation,” with its masterly dramatization of how a series of apparently innocent words can have differing and sinister meanings.

Henry still loves Celia, and doesn’t understand why she left him or the Agency.At the same time he’s trying to pin the responsibility for the massacre, which was evidently aided by a traitor from within their office, on her:

Despite the knowledge that this is the night that will truly end everything between us,  I’m swept up in mawkish romantic thoughts. How can this be? It can be because in each man’s life there are only a few women who can turn him inside out, who can cripple him with a smile. These are weaknesses, but they’re also a sign of humanity. Without these flaws, a man doesn’t really live.

This confusion between the fact that their job demands inhuman efficiency and ruthlessness and the fact that the agents are humans is a theme that Steinhauer mines in much of his work. In regular life being vulnerable can result in a broken heart – in the spy world it can result in the heart actually stopping. All the Old Knives is a fascinating tour de force, a stripped-down distillation of Steinhauer’s concerns, but fortunately one element he didn’t remove was his gift for twisty, unexpected plots, and the ending packs the usual wallop. (Jamie)