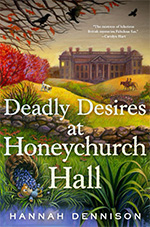 The second in a series featuring former TV personality Kat Stanford, this is a welcome addition to the always popular British village subgenre. The tone is “madcap,” in a good way. Kat is living with her mother in the carriage house of Honeychurch Hall; her mother has just informed her that her Uncle Alfred, recently released from prison, is about to join them.

Both women are also caught up in a village controversy: a high speed rail line is proposing cutting through the town, destroying buildings and historic sites (there’s a British Civil War battlefield smack in the middle of their countryside), and when they stumble across one of the train authorities in a walk through a field to find sloes for sloe gin fizzes, Kat is literally caught in the middle. She sees that the railway would destroy the town; on the other hand, its representative, Valentine Prince-Avery, is handsome and charming and he just wants to discuss “options.”

Dennison lightly balances several story strands: Kat’s mother, Iris, is actually the reclusive and wildly successful romance writer, Krystalle Storm; there’s the young wayward son of the Hall, Harry, who at seven, despises boarding school and keeps “escaping”; and there’s a new maid at the hall who appears to be channeling “Downton Abbey.” Throw in the Dowager Lady Edith, who prefers to ride sidesaddle, thank you very much, and the story mix is varied and entertaining.

There’s a death early on and another hinted at that comes much later in the story, but the atmosphere builds with the help of Uncle Alfred, who turns out to have the “sight” – he senses ghosts and knows when someone is in trouble. He’s also a dab hand with animals and finds a lost Jack Russell, Lady Edith’s mischievous Mr. Chips. Mr. Chips behaves very much like the wire fox terrier in “Bringing Up Baby”– he has a real love of digging and burying things he shouldn’t.

Populated with memorable characters, Dennison handily and believably creates a British village of a sort that exists not in the misty past but in the 21st century. Nothing is too terribly serious, however, except perhaps for Alfred’s execrable paint job of the carriage house living room. But as in any rollicking adventure story, all ends well, leaving the happy reader eager for more stories about Kat and her intrepid mother.