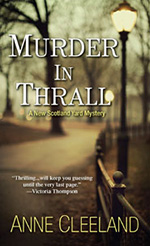 How has this terrifically inventive series slipped under the radar? This was one of our breakout books at Christmas when we could hardly order copies fast enough, and when I was recently at Malice Domestic, we sold lots of copies and one woman even told me she’d come to the conference specifically to meet Ms. Cleeland. After feverishly reading this one in a day, I can absolutely see why (and I plan on reading the next two as quickly as possible).

This has one of the odder set ups I’ve ever encountered in a mystery novel. While on one level it’s a straight up, almost typical, police procedural – a Scotland Yard DCI (that’s Detective Inspector to you) takes a young DC (that’s Detective Constable, the lowest rank) under his wing. It’s reminiscent of Elizabeth George’s pairing of Lynley and Havers – Cleeland’s DCI, Acton, is titled, as is Lynley; the DC, Doyle, is a working class (like Havers) Irish girl trying to find her way. She’s trying to absorb as much knowledge as she can, and as the story opens, it’s clear that Acton and Doyle work well together.

Cleeland, like any accomplished novelist, presents her two main characters as two fully realized beings living a life we are joining in progress. The case we join them on concerns a murder at a racetrack, one where Doyle has let a suspect get the better of her (he locked her in a stall) and she’s now dealing with the wrath of Lord Acton.

Each chapter begins with a short paragraph or a few sentences from the point of view of someone who is watching Doyle very closely: you might almost say, stalking her. As the story progresses (not very far, this is not a spoiler) it’s clear the stalker is Acton. He declares his feelings to Doyle early on in the novel though the two of them have been working together for awhile.

Doyle’s special gift is an intuitive sense about people – she can tell when they are lying and when they are not – it makes her terrific at interviewing suspects. So while she’s stunned at Acton’s revelation, she senses he’s OK, a good guy. While this sounds squirmy, the way Cleeland tells her story, it actually isn’t, and the budding and peculiar romance between the two main characters takes the lead, relegating what is actually a complicated and well put together mystery story to the back of the stage.

The way the story is told is different and inventive, and Cleeland also has the necessary skills needed to write a good novel: her characters are well thought out, her story is good, her London setting is excellent. While I raced to finish the novel it was only partly to find out whodunit. It was mostly to see how this very odd relationship was going to play out.

I can’t recommend this highly enough, especially if you like English police novels; if you enjoy some romance with your story, you’ll like this as well. I’m delighted that we sent so many copies home with customers, many of whom have come back for the second book in the series. This is a great addition to the contemporary British mystery array, and if you’re a fan of Deborah Crombie or Elly Griffiths or Jane Casey, step right up.