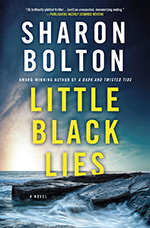 S.J. Bolton may have changed her name to the more agreeable and feminine “Sharon,” but make no mistake, her creepy intensity is undiluted. This novel is a stand-alone in the mode of her earlier novels – Sacrifice, Awakening and Blood Harvest – and boy does it get under your skin. If you aren’t big on an eerie, gothic storyline, give this one a pass. On the other hand if you enjoy a well written and unforgettable read, dive right in.

Set on the Falkland Islands (there’s a map in the front subtitled “Land of Sky and Sea,” a cheerfully ironic subtitle if ever there was one) about a decade after the well-remembered Falkland Island conflict of 1982. The conflict is still fresh for the islanders (who live with the threat of land mines in their sheep fields) and one of the main characters is a Falkland vet with PTSD. He’s not the main character, but he makes the timing relevant, though he’s not as obvious a plot device as that implies.

One of Bolton’s real gifts is creating troubled, memorable young women as her main characters – scarred veterinarian Clara of Awakening is especially unforgettable – and marine biologist Catrin joins their ranks. Catrin lives as a recluse after the accidental deaths of her two sons several years back. She’s an expert on sea mammals, especially whales, and her yard is decorated with a giant Orca skeleton. She’s governed by a simmering hatred of her former best friend, Rachel, who she blames for the deaths of her sons.

As the story opens, a young boy has disappeared and the whole island is out looking for him – and along with the disappearance of another young boy several months back, it’s looking like a sinister string of child deaths and disappearances, and while heartbreaking, it’s also bad for tourism, a staple of the Falklands, where cruise ships regularly stop with their loads of passengers.

Catrin joins the search for the boy, helped by Falkland vet Callum, who clearly still carries a torch for the now divorced and miserable Catrin. We’re not privy to the thoughts of Rachel until later in the book when a tragic turn in her household swivels the attention of the island her way. Both women live the life of outcasts, and a scene with beached whales early on makes Catrin’s descent into outcast hell even more dramatic. The scene with the whales is riveting, heartbreaking and hard to forget (or look away from, as you read), but it is not for the faint of heart, so be warned.

Foolishly, I thought I knew where Bolton was heading with her resolution and boy, was I wrong. She deftly shades the characters of Catrin, Callum and Rachel as well as delineating life on the Falklands – a fascinating bit of armchair travel – while keeping all the narrative threads of her disturbing story well in hand. This is definitely one of the reads of the year.