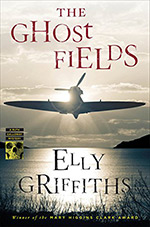 As far as I’m concerned, a new Elly Griffiths novel is major cause for rejoicing. Her sparkly, vivid series set on the coast of Norfolk and featuring archaeologist Ruth Galloway is always a delight. My daughter and I were also discussing how good Griffiths is at tricking the reader, in ways big and small, and seems to keep getting better as a writer. All of these things apply to her new novel which finds Ruth called in when a WWII plane is unearthed on the beach, with a grinning skeleton at the helm. She spots the bullet hole in his forehead straight away and we’re off to the races.

Griffiths is always an atmospheric writer, this novel is especially wind and rain lashed as the skeleton appears to share DNA with a local family, the Blackstocks of Blackstock Hall, a creepy, decrepit mansion straight out of a horror movie. The family is just about as creepy. Somehow you sense daughter in law Sally’s cheerful attempt to turn the whole shebang into a B & B isn’t going to take. In any case, news of the plane with it’s skeleton inside makes its way to the US (where in fact the US Army has done the DNA testing for the Norfolk police) and the TV crew familiar to readers from the last novel (The Outcast Dead) including dishy Frank turn up to make a documentary about the dead man “coming home.” The ghost fields of the title refer to the location where the plane was discovered, and where many of the WWII pilots met their deaths.

Ruth – always a bit clueless about affairs of the heart, even as she’s gifted in her chosen field – is unsettled by the arrival of TV host Frank. They’d almost had something going. This is intensely annoying to Nelson, the father of her daughter – but as he’s married to another woman there’s not much he can say about it. In any case all roads lead to the Blackstocks as a series of assaults and an especially grisly death seem to be linked to them by pesky DNA.

In typical fashion, much like Ruth herself, Griffiths seems to almost careen all over the map, plot wise, but there’s always method in her madness, and the cleverness of her story triumphs as always. The sturdiness of her recurring characters are also excellent – Ruth, Nelson, Judy, Cathbad et.al. are such real, human creations, complete with believable foibles, which is refreshing and welcome. With every new book, I can’t wait to revisit them. Enjoy The Ghost Fields – and like me, look forward to the next installment.