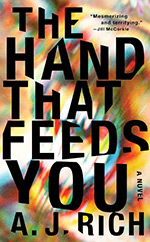 It’s no secret that I have a bias against slumming “serious” authors who try to write mystery books. They seem to believe that any idiot can produce crime fiction, so maybe it’s time they dashed one off themselves and finally achieve the money and success they deserve. Most of them, however, have not been prepared by their MFA programs to deal with such necessary matters as plot, pacing and suspense,and their well honed abilities to evoke suburban anomie, critique consumer culture and describe changing foliage are of scant use. Clearly, I’m disposed not to like such efforts and I usually don’t, even the ones that many people rave over, like John Banville’s Benjamin Black series.

So when I like I book I’m so predisposed not to, it must be a pretty good book. Amy Hempel and Jill Ciment are Guggenheim award winners, college professors and long time serious writers, and together, calling themselves A.J. Rich, they have written an extraordinary mystery/suspense novel called The Hand That Feeds You.

When I read an advance reading copy from a new writer, it has to grab me from the get go, and the set-up for this one is extremely compelling. Morgan Prager (any relation to Moe?) is a young woman who is completing her thesis on the psychology of victims and predators. She met her new fiancé Bennett as the result of her online trolling to attract predators to study, Bennett being so sane and seductive that he became the control group against which the deviance of the online weirdos could be measured. Her putative future happiness is shattered, however, when she returns to her apartment to find, in an memorably chilling scene, the bloody body of Bennett, who has been apparently mauled to death by her beloved rescue dogs; two pit bulls and a Great Pyrenees.

Quite naturally this horror throws her into an emotional tailspin. She’s pulled out of it after she tries to write a letter of condolence only to discover that the people he claimed as his parents do not exist, and, in fact, nothing that he told her of his past and present life had any validity. She doggedly (so to speak) begins to pursue this man mirage, and, as in many good mysteries, the true identity of the victim provides the solution to the crime. In the familiar mystery manner, the closer she gets to the truth the more dangerous things become, as Morgan discovers that she was not the only woman in Bennett’s life, one of whom was murdered before he died and another, more frighteningly, after.

The writing is vivid and powerful and the plotting extremely clever. Only at the great final reveal does the keenness of the book falter a bit, but the reader who has figured things out has to spend but a few pages wanting to slap some sense into the suddenly obtuse narrator. There’s quite a bit of serious, engaging rumination about the relationship between humans and dogs, men and women and the power trips, heedless cruelty and ultimate love that can result from their interactions. Although there is a measure of ultimate redemption, be forewarned that this is NOT a whimsical Chet and Bernie style dog story, and the compelling quality of the prose, the hard truths and the sex and violence coming at the reader from odd angles can make The Hand That Feed You at times a deeply disturbing book, not that there’s anything wrong with that as far as I’m concerned. Good job, A.J. Rich – you may not achieve the goal implied in your assumed name, but you made me like a book I didn’t want to. (Jamie)