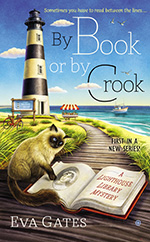 Berkley reliably cranks out an entire line of cozies, hitting many specialized areas of interest for readers. This one hits several of the cozy tropes – there’s a lighthouse, a library in the lighthouse, a cat, a young heroine, two suitors, and for an extra fillip, Jane Austen. All familiar tropes and yet, Gates brings something a little more kick ass to the cozy table. A little extra verve, and a brisk, hard to put down way of telling a story that will have you flipping pages.

Gates is the pen name of Canadian Vicki Delany, who has a long series featuring Constable Molly Smith, several books set in the Klondike, as well as several stand alones. She’s a real pro and it shows in her narrative chops. She knows how to pace and she knows how to end each chapter making you want to read on to the next one (I finished this is a day and a half, a real inhale of a read).

Anyway, I loved the idea of a library in a lighthouse – this one set on the Outer Banks of North Carolina. The apartment occupied by heroine and assistant librarian Lucy will probably make you drool, as will the special exhibit of Jane Austen first editions in the library lobby. Thanks to Jane Austen, the library is slammed with patrons, and it’s all hands on deck, with things becoming complicated when the president of the library board is murdered the night of the party for the opening of the Austen exhibit.

The death of the board president of course complicates matters in many ways, one of them being bringing to the forefront a contingent of new board members who aren’t sure continuing to fund the library is such a great idea. Then when the Austen books begin to disappear one by one (starting with Pride and Predjudice, natch) suspicion is heaped not only on Lucy’s boss, Bertie, but on Lucy herself.

Lucy is distracted by the attentions of both the mayor – a teenage love re-ignited – and one of the detectives, Butch. Gates ably populates her story with a variety of interesting characters, none perhaps more memorable than librarian wanna be Louise Jane, who insinuates herself wherever possible and does achieve her dream of being hired on temporarily while the staff deals with the Austen related frenzy.

As Louise Jane paints a vivid picture of the many ghosts inhabiting the lighthouse and their tragic backstories, she also wonders aloud, and frequently, why there’s a need to hire a “trained” librarian from the outside when she, of an old Outer Banks family, could so easily fill Lucy’s shoes. It makes for a nice bit of tension, which, happily, is not without humor.

As things wrap up, appropriately, on a dark and stormy night, you’ll feel real affection for Lucy and Bertie as well as for Lucy’s suitors, and you should be more than satisfied with the denouement. This light, zippy, first in a series book is not only enjoyable, it’s a real promise of more installments to come. I hope there are many.