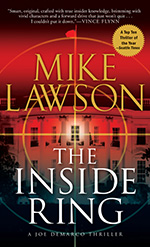 It’s always been a puzzle to me why the talented Mike Lawson isn’t a superstar, and his first book, The Inside Ring, is so good it really begs the question. I’m always in the mood for a thriller this time of year, and went to the Lawson part of the alphabet and grabbed this one on Christmas Eve. I’ve read others in the series but never the first, and it joins my ongoing mental list of terrific first novels that hit every mark out of the gate.

Lawson’s series character, Joe DeMarco, is a “fixer” for the Speaker of the House and works very much under the radar. His office is even in the basement of the House of Representatives alongside the janitorial staff. Whenever the speaker – long-time pol Mahoney – needs a task done that can’t see the light of day, it’s DeMarco he puts into motion. This gives DeMarco a lot of power and not quite enough as his official title and credentials are slightly nebulous. Because of DeMarco’s family background – his father was in the mob – he doesn’t carry a gun and tries to avoid violence. It often finds him anyway, though.

This novel begins with an assassination attempt on the President, who was on a weekend with his best friend, a well known writer. The writer is killed and the President is wounded. After a confession from the killer, things seem to be wrapped up, but the Secretary of Homeland Security isn’t happy and Mahoney asks DeMarco to look into it. As DeMarco zeroes in on one of the Secret Service agents who were surrounding the President, his investigation takes off in all kinds of unexpected ways. I figured out only one twist of the story, but the final one is a doozy that truly surprised me.

As a first novel, Lawson does introduce a couple characters who re-appear in the rest of the series, especially DeMarco’s powerful, lethal buddy Emma, a beautiful woman who has connections seemingly everywhere. While much of this set up sounds off-the-charts absurd, Lawson tells his stories in such a matter of fact, nicely detailed way that it never seems over the top. DeMarco is very likable – you’re rooting for him to get some furniture in his empty townhouse (his ex has taken everything) but even more, you’re rooting for him to get the bad guy.

Lawson utilizes all of my own “thriller rules”: he has a situation with interesting specifics (Washington DC, the secret service); he has a reliable main character, and he starts with a story where you as the reader know what happened but you don’t know why. As with any good thriller, the “why” is the journey. Lawson’s straightforward storytelling gets you there every time.