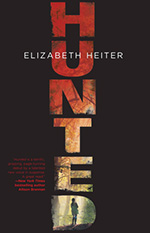 This is a neat first thriller with a really interesting main character. Evelyn Baine is a star profiler for the FBI, and it’s obvious Heiter is interested not just by the FBI jargon but by the whole business of profiling, and it’s a fascinating field, one not covered all that extensively in mystery fiction, with a notable example being Val McDermid’s Tony Hill. It’s odd there isn’t a greater profiling “presence” though there are some; lots of the FBI characters in mysteries are special ops or forensic experts.

More remarkably the main character is a petite, mixed race woman, not so great with people skills but instead a serious workaholic with a backstory. I never felt Heiter was cramming too much in though she was obviously setting up a series – the reason Evelyn became a profiler is very personal.

She’s called in to profile a case where the killer buried the bodies of his victims up to the neck. It’s a tricky and unusual case and very early on Evelyn herself is abducted, and it’s here that I almost closed the book, never to return. But have faith, dear reader – in true kick-ass fashion, Evelyn gets away and the title refers not just to the killer’s hunt for more victims but to Evelyn’s relentless hunt for him.

Thankfully, the book turned out to be far less gory and graphic than I had first anticipated. I liked that Heiter was turning the tables – Evelyn takes care of herself, refusing (sometimes foolishly) offers of help but proving she is a real survivor. This book was a well told story with a really good main character – I’m looking forward to more in the series.