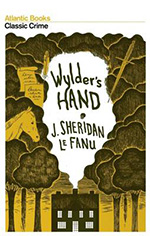 I generally read one book at home and a different one at work. Recently the home book was an old one, Wylder’s Hand, the 1864 “sensation novel” by J. Sheridan Le Fanu, and the store book was brand new, David Bell’s The Forgotten Girl. Strangely enough, I didn’t get very far in either of them before I realized that despite a span of 150 years, they had the same basic plot. I call it “the mysterious disappearance,” and even though it’s an ancient story, going back at least as far as Persephone, perhaps the original Gone Girl, it’s very much in the air these days, especially since we’re all about to ask where the heck the warm weather went to.

Le Fanu is best known today as the author of many classic ghost stories (if you haven’t checked out “Green Tea,” you really ought to), but he also was a popular novelist, including Uncle Silas, which showcases his peculiar ability to make the skin crawl. His creepy and eerie qualities are in abundant evidence in Wylder’s Hand, but they’re in the service of a plot which today would be classified as a mystery. The tale begins with the titular Mark Wylder about to marry the enigmatic beauty Dorcas Brandon, in a union that’s more the re-grafting of two powerful, entwined family trees than a love match. After a few unsettling comments about how he’d prefer pretty blond neighbor Rachel Lake, Wylder suddenly decamps to London, and from there to the Continent, sending letters that cryptically hint at vague difficulties and eventual return. The main beneficiary of his flight is Rachel’s brother, the shady Captain Stanley Lake, who himself marries the beautiful heiress (who has had a secret crush on him the whole time) and assumes the life of the manor born. Of his character Le Fanu says: Captain Lake was a gentleman and an officer, and of course an honourable man; but somehow I should not have liked to buy a horse from him.

You can catch something of Le Fanu’s tone here – ironic, clever and with a definite Dickensian flavor. Like much writing of the time, there are a lot of coincidences, a wobbly point of view and more than a few plot holes – but the point is not credibility but entertainment, and in this he richly succeeds, sneaking a good dose of class commentary in along the way. 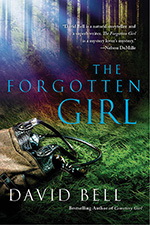 Neither the plot nor the prose of The Forgotten Girl is as rococo, but it is just as compelling, briskly proceeding with its suspenseful storyline in the manner of modern stalwarts like Harlan Coben and Chevy Stevens. I picked it up after several other new books couldn’t hold me beyond the first few paragraphs, and once I did I couldn’t put it down. In it, Jason Danvers and his wife Nora, caught both in an economic malaise and a relationship one, have returned to his old home town of Ednaville  in order to simplify their lives and stabilize their marriage, which had grown wobbly in high pressure New York City.

One night Jason’s sister Hayden, the family black sheep and former addict, out of touch for many years, appears at his door, teenage daughter in tow, and asks Jason and Nora to watch over the girl. Hayden claims she has cleaned up her act, has amends to make and will return in 48 hours at the latest. She does not, and the investigation that follows stirs up the embers of the other great conflagration of Jason’s life, the disappearance of his high school best buddy, Logan Shaw, the rich kid, who, following their fight on graduation night, apparently hit the road, confirming his peripatetic existence, like Mark Wylder, with the occasional letter. Jason’s nosing around after Hayden also seems to stir up her former running mates, the bad boys of high school days, grown even badder and scarier over time, one of whom is her ex-husband and the father of her daughter.

Then there’s that looming figure of the American imagination, “The Girl from High School,” Regan Maines Kreider, whose relationship with Jason was very close to becoming romantic when he and Logan fought over her that last night. She still lives in Ednaville, has been married and divorced, and she and Jason resume a not quite adulterous relationship over coffee and memories, though as events unfold it seems as though she knows more about the double disappearances than she’s revealing.

In Le Fanu’s world characters may be mysterious, but at some point they drop their masks to reveal their true nature. In the modern understanding human nature is much more fluid – the Danvers find that their growing attachment to Hayden’s daughter makes them question their decision to forgo children, and even the baddest of the bad guys can commit a good act. There is a lawyer figure in both books, however, and I’m afraid in terms of their character there hasn’t been much improvement over the years.

The “mysterious disappearance” plot, on the other hand, has remained extremely admirable, both in its durability and the thrills it provides. I heartily enjoyed both Wylder’s Hand and The Forgotten Girl, the former a charming yet creepy iteration from the past and the latter a crackling, suspenseful example of the best of today. (Jamie)