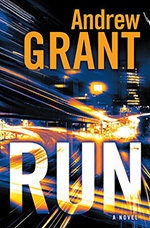 Andrew Grant at last returns – after a change in publishers – with a new thriller, Run. Grant uses a fairly conventional thriller set-up and twists it to his own devices through the use of perspective and a possibly untrustworthy narrator, something he leaves the reader to figure out for themselves. I always appreciate an author assuming intelligence on the part of the reader and while I may not be as intelligent as Andrew, I appreciated the leeway he gave me as a reader to figure things out.

A good thriller often presents readers (and the central character) with moral conundrums the character must respond to on the fly. Grant’s book is filled with many such moments, where his character, IT expert Marc Bowman, must make a choice leading down one path or the other. In the first chapter he’s summarily fired from his consultant job at a company called AmeriTel, where he worked as a data analyst. The firing comes just as the company is about to make a big move on the stock market which could either go very, very well or very, very badly.

He leaves – accidentally – with two of the company’s computer memory sticks in his pocket. He consoles himself by heading first to his favorite art gallery. The techie Marc’s favorite artist is Roy Lichtenstein, whose graphic compositions are made up of dots. The pattern and order of the dots, forming a picture, make sense to his computer analyst brain, and all through the book, the Lichtenstein he owns is high on his list of favorite things, along with his wife, Carolyn.

His day really sucks, however, because when Carolyn gets home she demands the memory sticks and they have a huge fight when he denies having them. For Marc, that’s moral crossroad number one, leading him down a path involving thugs, burglary, murder, car theft, and fire. He can see so easily a new program he can create with the AmeriTel data on the memory sticks and when Carolyn storms off, he sits down and gets to work. To him, it justifies his actions. However, when Marc wakes up the next morning he finds his hard work stolen and his front door wide open. He calls the cops who don’t seem to believe him, and that’s where things really go off the rails.

As Marc continues to make choices, as a reader you might say to yourself, why not turn in the memory stick? Why not call the police? Why not cooperate with Homeland Security? As a reader you slowly begin to doubt that the central character you are following might actually be, if not outright evil, at the very least morally ambiguous. As you are with Marc in his head seeing his view of things, you can understand how he justifies each move he makes, but the sliver of doubt in your mind sinks in deeper and deeper the further you read.

The story is assembled like a neat piece of machinery that would satisfy even techie Marc, I think, who often reacts to things like the guys on “The Big Bang Theory” – kind of like a guy not completely familiar with human behavior. Grant makes the computer stuff easy enough to follow even for the computer illiterate (or close to it, like myself) and provides a slam bang, non stop read that will have you both breathing a sigh of exhaustion at the end of the story but thinking back over Marc’s path of behavior. There’s really nothing better than a thriller that also makes you think.