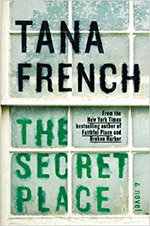 Both Tana French and Josephine Tey have books that are among my favorites as well as books I can’t slog my way through (confession: I can’t read Tey’s The Singing Sands).  I love Tana French’s Broken Harbor so much it’s one of my favorite contemporary mysteries; but there are other times when her books are a tad too long and a tad too over determined.  This is one of those times.

French’s prose skills are among the most beautiful of all contemporary mystery writers.  She catches an atmosphere, she has an ability to make you feel a place in your bones, like no other writer.  That’s no small skill, and in her new book the place she is out to capture is a Catholic girl’s school in Ireland.  French has always been interested in the otherworldly nature of the woods, or the forest, the ones that you might encounter in a fairy tale.  The woods in fairy tales may hold enchantment or danger; in this novel, the woods surround the school and supply both elements.

As Detective Stephen Moran arrives on the campus of St. Kilda’s all he can say is “it’s beautiful.”  But as with all beautiful places there’s another side, and Moran is there to see if he can catch a ride on the murder squad after he hands over a clue to the lead detective, Antoinette Conway, on a year old case, the murder of a boarding school boy on St. Kilda’s campus.  The detectives, working class, are the outsiders among the privileged girls who board there.  One of them, the one who has brought Moran his clue, is a boarder whose father is a detective, higher ranked than both Moran and Conway.  Treading lightly is on their minds; to them the school is a beautiful minefield.

What French is very, very good at is explicating relationships.  She’s like a writing microscope, examining her subjects delicately and completely,  So her portrayal of two sets of friends – Julia, Holly, Selena and Becca – and their counterpart, “mean girl” set headed by the dastardly Joanna, is the best thing about this novel.  Holly is the detective’s daughter and it’s she who has brought Stephen the clue, a photo of the dead boy with cut out letters saying “I know who killed him.”  Thus, Holly is also the one who brings intruders into their particular Eden.

As a graduate of a girl’s boarding school myself I can attest that the friendships I made there were the most intense of my life, friendships that have now become lifelong. It’s an intense time and that may be what makes the bonds so strong.  Even today, more than 30 years on (almost 40 now) at class reunions we all feel as though we met up five minutes ago.  The relationships still hold, though now changed by time and the events of long lives.  French has that part of her story absolutely right.

French’s concern is the moment when the girls realize that their friendships are about to change, even end, as they prepare to graduate from school and enter the big, real world.  Delicately, she goes back in time to when the murder victim, Chris Harper, was still alive and traces his connections to the girls in the story forward, interspersing her backward look with the questioning of the Detectives, who are eager to solve a high profile case but are often flummoxed by the girls who are misleading, who lie, and whose loyalty is mostly to one another.

That’s all well and good.  Her portrait is absolutely complete, to the point where she made me wonder why I kept reading and why the book was so, so long.  As with many of her novels I felt it could have benefitted by trimming a hundred or more pages.  And while she’s writing a novel that involves police and let’s face it, a brutal and baffling murder, she often lets go of her actual plot to meander through the girls’ psyches.  And their psyches are the point but I felt the balance was off, and I didn’t completely buy her resolution. 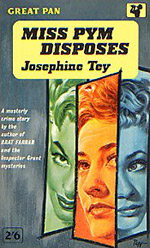 Tey’s examination, in Miss Pym, of a girl’s school is also intense and memorable but told in a much briefer space.  Perhaps it’s the difference between the efficient Scot – Tey – and the romantic Irish woman – French.  In any case, while the reasons for the behavior of the girls are similar, Tey gets to it much faster.  She says a lot in a sentence as brief and to the point as “The only difference was that Desterro saw the insult, and Beau the injury.”  And Tey, with her conciseness, actually makes the crime, when it occurs, very shocking.  I’m even shocked on a re-read, and I’ve read Miss Pym five or six times.  French belabors her crime in a way, making it almost a part of the landscape and therefore without as much impact to the reader.

Can a mystery be “literary”?  Absolutely, and French has worn this appellation since the publication of her first novel, because of her spectacular prose and characterization.  In that way they are literary.  But she is also writing a mystery; in this novel, the plot goes a bit by the wayside, but more importantly, the emotional “truth” at the heart of her crime isn’t quite right.  In Tey’s novel, maybe it’s not authentic, but it feels right in relation to the story, and moreover, the ending of Pym still makes me think.  Tey leaves space between her words for the reader to consider, to figure things out; French leaves no such space, and it’s a little exhausting.