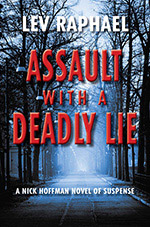 It’s been a few years since Professor Nick Hoffman has made an appearance (Hot Rocks, 2007), and he fills a nice gap. There are few academic based mystery series, and this is an engaging one, set on the fictional campus of “SUM” or State University of Michigan in “Michiganopolis,” a town that sounds suspiciously like East Lansing, where Raphael teaches classes at MSU. His central character, Nick, and his partner, Stefan, live a peaceful life on a bucolic street with their Westie, Marco, enjoying books, movies, food, wine and each other.

Until. And this feels like a story Raphael had pent up inside him and had to tell. Until one terrible night a SWAT team storms into Nick and Stefan’s home, handcuffing both of them on their front lawn in full view of the neighbors, taking Stefan away to jail and questioning before Nick knows what is happening. Luckily, one of their new neighbors, Vanessa, turns out to be a lawyer and she swoops in with reassurances for Nick and more practical assistance for Stefan as she follows him to the jail.

Nick is left at home to wait and wonder and it’s almost dawn before an obviously traumatized Stefan returns home, heads to bed without a word, and leaves Nick and Vanessa in the kitchen to talk. SWAT had gotten a tip and thanks to the heightened paranoia and militarization of the police since 9/11, they are empowered to follow up on tips. No charges were brought against Stefan but before Vanessa leaves she cautions Nick not to talk to anyone.

As Nick and Stefan try to clumsily and uncomfortably reclaim their lives, they find they are both paranoid, and with good reason as more incidents follow the first. Though none are as terrible, they are still deeply disturbing. Raphael also turns an eye on the constant surveillance all of us are under in one way or another, with cameras literally everywhere. The recently reconfigured Department of English where both Nick and Stefan teach has them wondering if they are being filmed and/or bugged. And as readers (and US citizens) we are jittery enough to buy into their paranoia and the idea that we are all being watched and recorded.

I guess the theme of this book is how far is too far? What does it take to make any of us feel safe? Nick explores that by buying a gun and going to the shooting range to learn how to protect himself. And the unease comes between him and Stefan as each man feels uncharacteristic rage and an urge for revenge and safety. As Raphael winds up his story, cleverly making use of several threads he’s pulled though the novel, the conclusion seems, sadly, all too possible and believable. This book questions our assumptions and our behavior and the ways society is trying to remedy the violence we all live with. That’s quite a punch to pack into a brief 176 page volume.

I was also delighted to reconnect with Nick and Stefan, two of the more appealing mystery series characters around. I love the snark and snap of the academic setting, something Raphael appears to have nailed. All in all, a nice return of an old favorite.