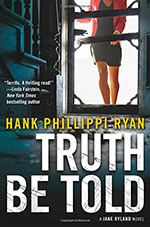 This is Hank Ryan’s third novel in her series featuring reporter Jane Ryland, and this one is by far the strongest of the three, as I can see Ryan’s skill as a writer deepening. She’s always had the story part down pat – she’s a reporter in “real life” – and she’s a reporter in her bones in that she’s able to tell a good story in a to the point way that gets your attention and holds it. No small feat.
What’s even better here in book three than in book one are the details of reporting that Ryan has folded into her story, making the whole thing more authentic and grounded.

Ryan has an issue she builds her story around in each novel, in this one, it’s home foreclosures and she gets the reader from the very first chapter when Jane and her photographer, TJ, covering a foreclosure for a bigger story, stumble into a murder when a dead body is found in the empty house. Ryan skillfully ties the foreclosure story back to the banks and to some degree the real estate industry and peels back the onion of corruption as she goes.

What I especially liked about this novel were the dueling relationships, and I suggested to Hank that it reminded me of the old Katherine Hepburn/Spencer Tracey film “Adam’s Rib” in that her two main romantically entangled protagonists are both professionals in professions that sometimes don’t mesh. They clash and cause trouble. Jane is a reporter; her boyfriend is a detective. He’s scrupulous to the point where he doesn’t give Jane any special treatment and they warily ignore each other in public.

As in “Adam’s Rib” there’s a mirror, dysfunctional relationship between a newbie banking executive and a higher up exec at the bank, too handsome for the newbie to resist though the reader can see he’s a sleazeball. In the film the “mirror” couple was a husband and wife triangle where the wife shoots the dastardly cheating hub; the film is a bit lighter than this novel but the sparkly tone, the fun back and forth, is present here.

Jane and Jake’s relationship believably teeters on their professional obligations, though they obviously love one another. The real world situations both encounter lend a feeling of authenticity to their romance and make it an important part of the fabric of the story which is also, by the way, a terrific thriller. I was tricked by the bad guy’s identity but Ryan had totally set it up, I just missed the clues. One of my favorite things any writer can do at the denouement is to make the “aha” moment when the killer is revealed a shock and at the same time a well laid out solution. Another writer who is very good at that is Laura Lippman, also a reporter turned novelist.

Ryan seems to have hit her stride as a writer. The sparkle she brings to her storytelling buoys up her whole enterprise and leaves the reader happily wanting more.