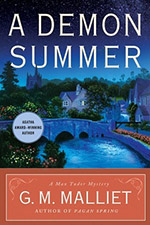 Of all cozy writers, I think Malliet has the purest, most elegant prose.  Her writing is a joy to read.  That alone would set her books apart, but she’s also deliciously re-visiting the British village mystery and making it her own, to the delight of mystery fans everywhere.  My customers have quickly made her Max Tudor series a favorite.

So far she’s used seasonal titles and in this one she’s up to her last season, summer, as she spins a tale set inside a convent.  Max, the vicar of Nether Monkslip, has been asked by his bishop to look into a mysterious fruitcake poisoning originating in the convent of the Handmaids of St. Lucy.  The fruitcake is a bit of a specialty and the victim was the unpleasant Lord Lislelivit, happily recovered but angry and demanding answers.

Max is worried the bishop will discover his fiancée, Awena, is heavily pregnant, and that they aren’t yet married.  With this thought at the forefront of his mind, it’s with reluctance that he leaves Awena at home to begin a discreet investigation.  The nuns know why he’s there, of course, and Malliet utilizes the extremely traditional trope of his interviewing each suspect in turn.

This allows her to give the reader an insider view of the workings of the convent and the duties fulfilled by each sister – the kitcheness, the librarian, the infirmaress, the abbess, the novice, and so on – and in this way she’s able to tell her story, which of course includes the murder of Lord Lislelivit.  He’s the most unpleasant man on canvas, and so of course he has to go.

With the arrival of the police, the nuns draw in their skirts, as it were, but of course they are forced to cooperate with the authorities.  This is basically a locked room mystery as only someone inside the convent could have committed the murder.  Malliet adds to her suspect pool by including some guests on retreat (of which Lord Lislelivit was one), and so she is also able to fold the wider world into her story.

As Max investigates the gentle, contemplative life of the nuns, where prayer is the highest priority, he also uncovers some financial shuffling about on the part of the nuns and some connections, past and present, which eventually help him solve the crime.

While Malliet hews very closely to the Agatha Christie model we are all so familiar with, she’s made it more contemporary by supplying some psychological depth and reason for the characters to do the things they do.  She has a shade of darkness to her storytelling, not as grim as P.D. James’ or Ruth Rendell’s, but still it gives her stories an extra bit of distinction.

Unlike James and Rendell, she’s willing to have a happy ending, and this book ends with the union of Awena and Max in a very satisfactory fashion for the readers who have been following their courtship through now four books.  She’s also given the reader a bird’s eye view into the life of an Anglican convent.  All in all, a more than enjoyable read.