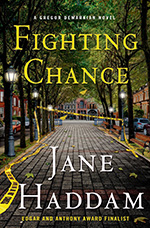 While much of the attention in publishing is focused on dazzling, huge best sellers, it’s the old reliables, steadily publishing year after year, who keep the engine of publishing moving along.  Jane Haddam can now boast 28 novels in her long running Gregor Demarkian series.  While there are some series entries I disliked it would almost be more surprising if there weren’t.  When Jane Haddam is “on,” she’s one of the best, and this turned out to be a favorite of mine in her long series.

As she uses the tropes laid out so long ago by Agatha Christie, even referring to Gregor Demarkian as the “Armenian American Hercule Poirot,” she makes them fresh and still incredibly enjoyable.  Demarkian, for the uninitiated, is a former FBI agent (which gives him all kinds of connections), now working on his own as a consultant.  Like Poirot, he is a “world famous detective.”  Poirot reveled in his fame; Demarkian despises it.  They do share a mustache, though I feel certain Demarkian’s is un-waxed.

After so long it would be easy for Haddam to write in a kind of self-referential shorthand regarding her setting and recurring characters, but she avoids it and somehow manages to balance a bit of explanation with the story at hand.  You could pick this one up and be as comfortable as if you were starting with the terrific first in the series, Not a Creature Was Stirring.  She does use long established characters as main players in her drama in this novel, making it one of her strongest, most deeply felt books.

Gregor lives in an Armenian enclave in Philadelphia, and it’s here he’s brought his Main Line wife, Bennis, who has adapted and adopted her new neighborhood with enthusiasm.  One of the keystone personalities of the neighborhood is Father Tibor Kasparian, best friends with Gregor, and now accused of murder.  Father Tibor was found, covered in blood, in the chambers of a judge well known for giving juvenile offenders long, harsh sentences.  The circumstantial evidence, including a damning phone video of Tibor, send him to jail where he is refusing to talk.  To anyone.

Haddam often – or always – has an issue she’s interested in exploring; in this novel, it’s the juvenile justice system.  In her best novels, the issue doesn’t overpower the story, and that’s the case here.  It’s the connections between the characters, long established and lovingly created, that provide the true depth to her story.

As I was reading I also sent Haddam a mental thank you note – this novel, packed with plot, drama, characters and even a vivid setting, still clocks in at a brisk 311 pages.  Old school indeed.  This is one of the very best traditional mystery series being written; each installment, if not a joy, is thought provoking and engaging.  I would be delighted to read 28 more books about Gregor Demarkian, and if the “Very Old Ladies” could also be a part of things, that would be another gift.