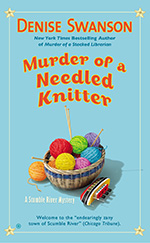 Denise Swanson, 17 books into her Scumble River series featuring school psychologist Skye Denison, has at last married Skye off to her sweetheart, Wally, and sent them off on their honeymoon aboard a cruise ship.  Guess who else turns out to be aboard?  Skye’s best pal, Trixie, on a cruise with her own husband, and her parents.

Swanson pretty much could have left her plot at that:  your parents on your honeymoon?  Anyone’s nightmare.  But she’s never been a lazy writer and she’s not about to start now, as she also arranges for there to be a group of knitters on board (hence Skye’s mother, May), complete with an obnoxious group leader, hated by all.  It’s not long before the much hated Guinevere is a goner and the entire knitting group including especially Skye’s mother, who had public words with her, are suspects.

While the knitting group is comfortably familiar to anyone who has a passion – a book club, a needlepoint group, a painter’s group – the specifics of the knitters themselves, who also make for a well rounded suspect list, add spice to the story, as does Wally, Skye, and Trixie’s investigation into the murder as laws aboard a cruise ship are a little more lax than they are onshore.

But what I really enjoyed about this book was the cruise itself – I felt like I was on one, so well does Swanson depict the ship, the food, the nightlife and activities, and the ports of call.  It was fun for this reader to see Skye out of her usual element and I ended up the book both satisfied with another great story and  – hungry!  People on cruise ships apparently do nothing but eat and it all sounds delicious.  More, please, Ms. Swanson!