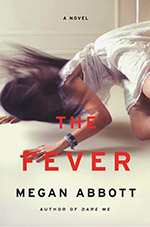 Adolescence is, if nothing else, a time of high drama. Part of it is, of course, those crazy hormones coursing through young bodies, but there’s also a definite lack of perspective – without a substantive field of experience, small things can loom very large while important ones appear insignificant. The resulting hullabaloo can be comic, but there is also the occasional tragic result such as teen suicide, school shooting or other lapses in judgment that can shadow an entire lifetime. And when things go bad, no one captures the angsty existence of today’s teens with more vivid power than the immensely talented Megan Abbott, as evidenced by her latest excellent effort The Fever.

I’ll admit that I used to think that, like her avatar James Ellroy, Abbott’s writing powers were strongest the farther back in history her books took place, but The Fever is just as good as any of her first few books, if not better. The story begins with a set-up I dimly remembered from the news – a teen girl comes down with an strange and seemingly inexplicable illness, which seems to spread, but only to other girls, and with equally bizarre symptoms. This “plague” spreads from the tight, yet friction-filled circle of central character Deenie and her school celebrity friends to their classmates and then to the rest of the community. The divisions and insecurities of the teens are exposed and the furor attracts the attention of the adults, who for once turn their self-absorbed eyes in their direction, attempting to exercise their seldom used parenting skills. If anything, these “grown-ups” act even worse than their progeny, amped by the contemporary internet inspired blend of passion in the service of half-truth.

The narrative is elevated from “Young Adult” status by the presence of Deenie’s father Tom, a teacher at the school, a fully realized character who represents a more reasonable voice, reasonable, that is, until the police start questioning his daughter. The police presence represents the first hint that the reader is holding a crime novel, and that there will be a plot and suspense in addition to the fine writing and characterization.

Abbott’s filmic style is immersive and atmospheric, drawing the reader into the heady teenage world, while also tracking the parallel hysteria of the adults. As usual, she brings great skill and something different to the crime fiction world, making The Fever not only one of the best reads of this summer but of this year as well. (Jamie)