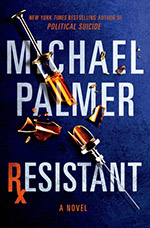 Michael Palmer, one of my very favorite guilty pleasure writers, unfortunately passed away last winter, and I can’t tell you how much I will miss his books. This one joins a fledgling series featuring Dr. Lou Welcome, coming after a long string of successful stand-alones. Stand-alone or series, Palmer’s formula rarely varied and it’s so crazy enjoyable I had a hard time putting any of his books down. There’s always a misunderstood doc at the center of the action, oppressed by whatever evil force Palmer came up with for a particular book, and the odds are always stacked against the doc. (Also, a clue: whenever another character calls him “doc,” that character is to be trusted).

In this novel, Dr. Lou Welcome, a recovered addict who now works with other doctors in recovery, is on a work junket. His boss’ wife is in the hospital and he’s been elected to take over and give a speech for his boss. Lou has brought his best friend (and AA sponsor) Cap along for the trip, a trip that begins each day with a rigorous trail run. Cap runs a boxing gym and is always pushing Lou to work harder.

On one of the mornings Lou is lucky enough to get a tour of the CDC (Center for Disease Control) as part of his trip and he gets a front row view of all the nasty bacteria being fought by the scientists at the CDC. The book has an opening segment with a young woman fighting off just such a bacteria, and, not being a Palmer newbie, I knew she was toast (I was right). This serves Palmer’s purpose though: it made me invested in the outcome.

Then the unforeseeable happens – Cap and Lou are out for a run and a terrible accident shatters Cap’s leg. It’s not a difficult leap to figure that Cap will get infected with the very same bacteria that killed the girl, putting Lou in a race against the clock. His foe, though he doesn’t know it, is a group called the 100 Neighbors, who are trying to bring down what they feel in an unnecessary government by any means, including the spread of a deadly virus that only they can cure. Unfortunately the virus has mutated and spread a little more quickly than they had planned, with no cure in sight.

The various characters and paths it takes for Lou to come to the rescue are both imaginative and entertaining. Palmer’s narrative genius is a combination of compelling characters and impossible situations, with a very real medical knowledge behind his writing. Michael Palmer was in real life a doctor and recovered addict, and he brought those things to bear on his writing. From all I can tell his death was a loss in every way to both the mystery community, to his family, and to the world in general. I am very grateful for his books and hope they will continue to enjoy a lengthy shelf life. (Michael Palmer, Oct. 1942-Oct. 2013).