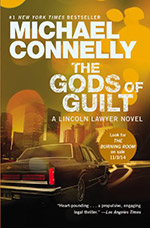 Other writers must gnash their teeth – does Michael Connelly have to be the best all the time? His Harry Bosch books are one of the greatest police series of all time, and he’s now working on a similar level with his Mickey Haller legal series. To me, these books blow most other legal thrillers out of the water. The series started strong with The Lincoln Lawyer, and the excellence continues. I especially liked the early in the series reveal that Harry and Mickey are half brothers.

These books can be enjoyed also on an individual level, though you’ll miss some of the connections the ongoing characters in the books have to one another and the ways their relationships change. However, the thing in these books is plot, and that never gets old or needs an explanation.

In this novel, Mikey is asked to represent someone on a murder charge, at the recommendation of the victim. When Mickey hears the victim’s name, he’s not sure who she is, but he does figure it out pretty quickly and agrees to take the case of Andre LaCosse, digital pimp.

The dead woman, Giselle, turns out to be a prostitute Mickey thought he had rescued and gotten out of town long ago. He’s heartbroken to find she returned to the life, and he knew her as Gloria, or as she was known as a prostitute, Glory Days.

As Mickey unpeels the layers of the case, which involves a corrupt DEA agent, police investigator, and an incarcerated Mexican cartel drug lord as well as an incarcerated attorney who works things from the inside through his inept son on the outside, it becomes clear to both Mickey and the reader that Andre is probably innocent.

The fact that Mickey is a defense attorney gives Connelly wide leeway as far as examining issues of morality, guilt, and justice. In his detailed and realistic courtroom scenarios, he makes it clear that the law often hangs on both the leeway of the judge, as well as the competence of the lawyers and the jury, whom he refers to as “the gods of guilt.”

These themes have always concerned Connelly as a writer, and justice in its purest form – i.e., what is right – is always at the top of his agenda, however it’s arrived at. Mickey’s methods of arriving at that destination are often creative and a bit twisted, and always smart. He sometimes leaves a path of unintentional destruction in his wake, and this novel is no different.

There are several twists in arriving at the ending of this novel, which at this point in Connelly’s career, is almost to be expected. I thought the ending was excellent. After you finish though there’s a note from Connelly explaining that he’d had a different ending in mind, but thought it hadn’t worked. That ending is also included, and it’s a fascinating look inside the working mind of a writer who is, to my mind, one of the best pure narrative storytellers in the business.