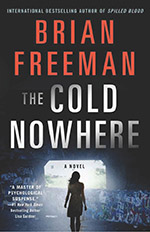 Brian Freeman’s sixth installment in his enjoyable Jonathan Stride series set in Duluth finds Stride still struggling with emotional entanglements, past and present. Some of the threads Freeman has pulled through the books to date find a resolution of sorts at the end of this novel, which was, to me, one of the best of the series. Stride, a widower and Detective on the Duluth force, has just wound up an unfortunate romance with his partner, Maggie, and is on the outs with his sometime girlfriend, Serena, a former Vegas cop who now works with the Duluth sheriff’s department.

Stride’s past comes back to bite him in a big way, when a young woman named Cat turns up at Stride’s house seeking help, telling him someone is trying to kill her. Stride’s protective instincts kick in and they are intensified when he realizes that Cat is the daughter of the murdered Michaela, a woman Stride was trying to protect from her abusive husband. Cat, a tiny girl at the time, hid under the porch and heard the whole thing. Landing in foster care her life has led her to prostitution and makes her unreliable as far as Maggie is concerned. She thinks the emotional Stride is being too easy on the girl

Maggie, one of my favorite characters in the books, is a tiny Asian woman who brooks no stupidity or wrongdoing anywhere around her. She and the straightforward decent guy Stride are an excellent yin and yang. I’m hoping future books find that they are able to move past their disaster of an affair.

As the plot unfolds, Maggie works her own leads while Stride works his, and careful and meticulous writer Freeman has many threads to his story, all of which tie satisfactorily together by the end of the novel. He’s also excellent at character, and many of what I refer to as “side bar” characters are well drawn and memorable, including Cat’s unfortunate Aunt Dory and a sleazy yet very wealthy and influential car salesman known as Lowball Lenny. The Duluth setting is also well drawn and the cold and windy north is well represented as are some of the more unsavory parts of the city. This is a terrific and fast paced read with great characters, a vivid setting and a story that’s hard to put down or forget.