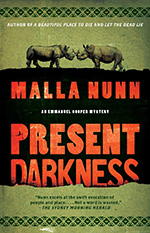 I haven’t read Malla Nunn since her first book, A Beautiful Place to Die, a beautifully written novel.  In that book she establishes her three central characters: Emmanuel Cooper, a white policeman; Shabalala, a Zulu policeman; and a Jewish doctor, Zweigman.  The books are set in 1950’s South Africa, which makes all of these relationships loaded.  In the first book the heaviness of the connections almost overwhelm the story.  In this novel, Nunn’s fourth, the characters are established and comfortable and the story being told can run on its own steam.

Cooper, like Charles Todd’s Ian Rutledge, is a war veteran (in his case WWII) with the shade of a dead officer living inside his head, a gruff, take no prisoners Scot.  Zweigman is a survivor of Nazi concentration camps; and Shabalala bears the weight of living as a black man in a country controlled by white men.   Every connection, action and reaction in this novel is racially tinged, necessarily so.

Basically Nunn is writing about a world that is out of balance.  The white control of South Africa is so tight because the whites fear what will happen if they let up; the natural tendencies of human beings are not considered in the way the South African government tries to control race, boundaries, both geographical and otherwise, and behavior.  Cooper lives a secret life with a mixed race mistress who has borne his child, violating many white taboos.

The story Nunn tells in this book is a gripping one:  a white couple is discovered beaten to within an inch of their lives and their teenage daughter names Shabalala’s son as the culprit.  A remarkable amount of convenient evidence turns up making the case against the young man seemingly airtight; Cooper doesn’t buy it and he and Shabalala are on their own quest to prove the youth’s innocence.  The daughter has been whisked away and the son isn’t talking or providing himself with an alibi.

The connections of the story threads in this novel are deep and brutal; but so was the reality Nunn is writing about.  She describes the different parts of South Africa – Johannesburg, the shadow ghetto city and the countryside vividly and also makes clear that none of these parts interface.  They all operate more or less as their own country, a true world out of balance where none of the parts relate to the other parts and understanding of any “other” is non-existent.

It makes solving a crime doubly difficult and any evidence Cooper and his little gang of three uncover has to be ironclad to stand up as evidence and free Shabalala’s son.  In true mystery tradition Cooper operates as an absolute outsider; his special skills, apart from smarts and being able to take a beating, are his choice of friends and a natural gentleness that actually serves him surprisingly well.

This is also a terrific crime story, not just a portrait of a difficult and brutal time in history.  When all the threads of the story are at last woven together, the resolution seems a natural one.  When Shabalala tells Cooper they must “wash before going back to the world of ordinary things,” it seems Nunn has brought a bit of balance to this part of her story at least.  This is a wonderful, thoughtful, beautifully written book.