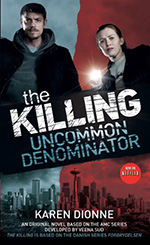 Karen Dionne joins us to launch what is not really an adaptation of the AMC show “The Killing,” but a prequel using the characters and setting familiar to any fan of the show. Reading the cover, it’s interesting to see the progression: “The Killing” began as a Danish show, “Forbrydelsen,” was developed by Veena Sud for U.S. television, and is now a novel by Karen Dionne.  At that point of removal I think the work becomes so far from the source that it’s now Dionne’s own.

For those of you not fans of the show, it’s a police show set in Seattle, featuring the uncompromising, workaholic, single mother Detective Sarah Linden; and the slightly less tightly wound Detective Steven Holder, back from working undercover.  Dionne goes backward in time from the show.

While the book reads and is very similar in feel to the TV show with the characters established as leads also the leads in the book, there’s a bit more lightness in Dionne’s take on things.  I found that very welcome.  The sun even shines in rainy, dreary Seattle in one scene, something that never happened on the show.  In this iteration Detective Sarah Linden and Detective Steven Holder haven’t actually met.  Holder is still undercover and Linden is still in a relationship with Rick (fans of the show know this is doomed).

The TV series is very noir in that few of the actors in the unfolding drama can be trusted, except for the two cops at the center.  And it’s noir in feel – dark and damp with the central characters pretty unhappy, driven folks who are overcoming a great deal of childhood and emotional baggage.

Dionne’s smooth and meticulous storytelling style fit in beautifully within her parameters, and as I read, it took on a life of its own.  Dionne’s novel is a well put together police procedural and she fills in some of the backstory of both Linden and Holder.  By the end of the book, you really can’t wait for them to start working together.

The story concerns a meth cooker whose trailer blows up and two brothers whose bodies are discovered miles apart, but killed within hours of one another.  Linden puts the pieces together on her end, and Holder, undercover in a trailer park, close to every tweaker, cooker and dealer in Seattle, has an inside track on the dead cooker.  Some of this is familiar to any fan of “Breaking Bad,” of course, but meth isn’t a theme specific to that show.  It’s a national plague.

As Linden and Holden delve into the pasts of the dead men they begin to discover unlikely connections.  This brisk novel is a terrific read that sped right along; I was captivated by it and quickly stopped thinking about the TV show.  I just focused on the story Dionne was telling.  She supplies some good plot twists, red herrings and heartbreaking details essential to any good noir. This is a well done read.