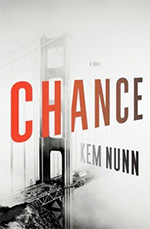 Kem Nunn’s latest begins with a pretty straightforward James M. Cain setup. The titular character, Dr. Eldon Chance, is a semi-hapless, yet highly intelligent psychiatrist who is going through a nasty divorce and burning out on his profession, which largely consists of lending his expertise in legal matters concerning people who have been damaged by various kinds of physical and mental trauma. Into this life of quiet desperation strides Jaclyn Blackstone, a beautiful, wounded woman who has evidently been abused and trapped by her husband, a corrupt cop. It’s no surprise that Dr. Chance soon finds that “His days of respectability were behind him. There was no getting around it and none of his present endeavors were likely to bring them back.”

Fortunately or unfortunately, Chance’s “magic rabbit” in his attempts to rescue Jackie is a man called D, a very large, hairless Nietzsche devotee and purported combat vet who is either the answer to his prayers or totally delusional. Anyone familiar with Nunn’s previous, excellent work (and you should be), will know that things will get complicated and dangerous very quickly, and that none of the characters are exactly what they appear to be, revealing a depth and complexity rare in crime fiction.

One of his many gifts is the ability to draw on noir tradition while still producing a book full of ideas, as evidenced by the San Francisco setting, a chiaroscuro backdrop popular since Hammett, which in Nunn’s hands can also become permeated with a thoroughly contemporary malaise:

On the day in question he could not shake the feeling that he was being shown the future. It was something less than what one might have hoped for. The flames had died in the East Bay hills but what felt to be the entire Bay Area remained covered in ash. Cars were made to appear uniform in color. It lay thick in the corners of things like drifts of dirty snow. A trio of young Asian women he took as college students passed along the sidewalk wearing surgical masks. This is how it will look, he thought, moving past the women. It will look like this, and then it will look worse.

Nunn is able to take the best things about the crime genre – pacing, excitement, extreme situations – and add contrasting shots of absurdity and profundity, then combine them with the finished prose, literary references and overarching thematic unity more common in so-called “serious fiction,” skillfully conducting his readers and characters right to the edge (or over it in Chance’s case), the place where human nature and even the nature of things themselves is profoundly, if fleetingly, revealed. (Jamie)